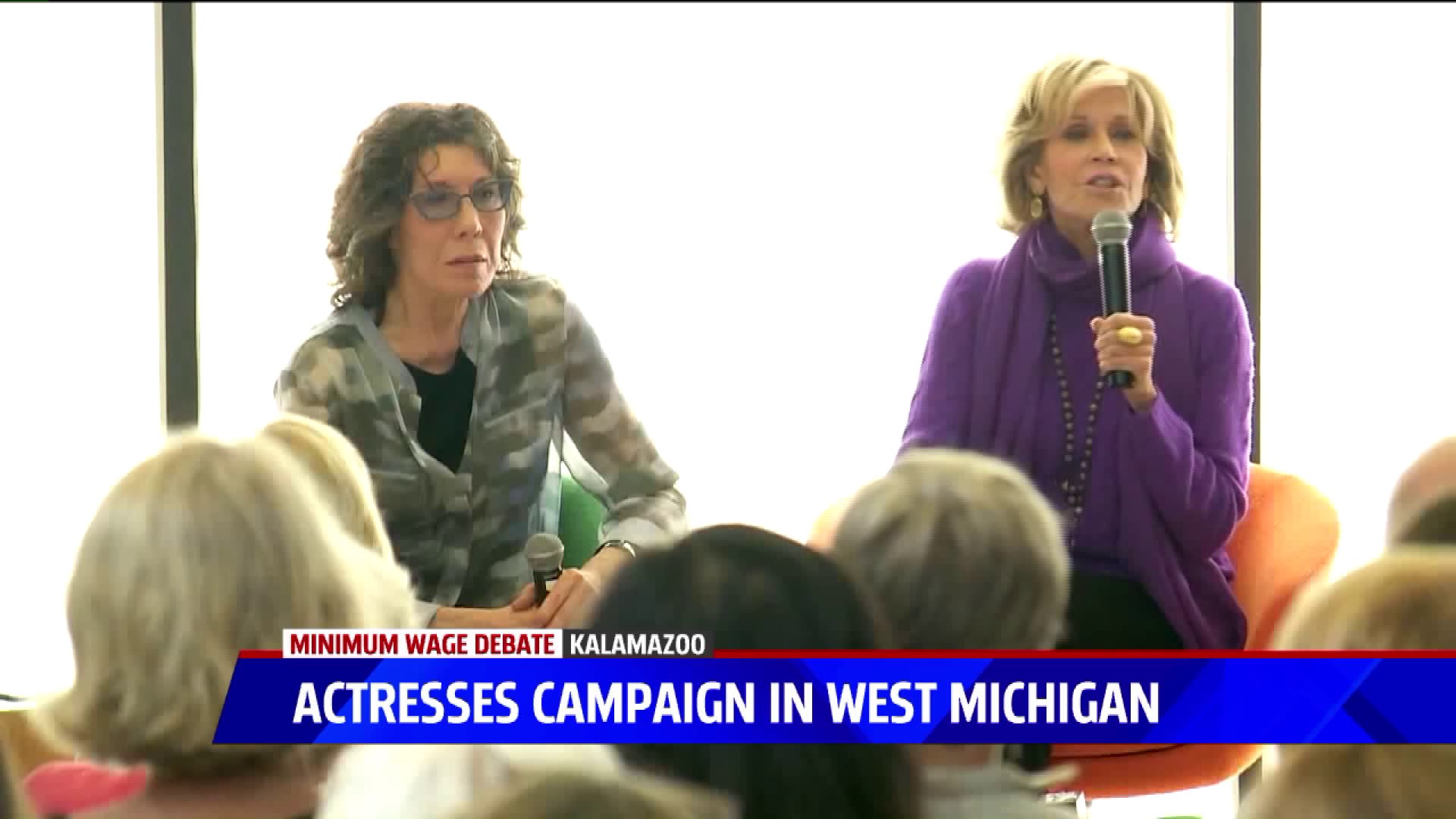 KALAMAZOO, Mich. — Lily Tomlin. She’s a Tony Award winner, Grammy Award winner and has a couple Emmy’s to her name. However before all the accolades and limelight, she was a waitress.

“What an irony,” said Tomlin remembering her days as a waitress. “Here we are surrounded by food and many of us find ourselves on food stamps.”

The Detroit-native spoke to a packed room at the Arcus Center at Kalamazoo College Tuesday afternoon. She and Grace and Frankie co-star Jane Fonda were touring the state, campaigning to raise the minimum wage.

“Michigan is very interesting state,” said Academy-Award winning actress Jane Fonda. “It became a key state last November. This is a state that for decades that has been a democratic stronghold. This is the state that was the birthplace of the American Labor movement.”

Fonda reminisced on her early activism days, meeting with Michigan's auto industry workers decades ago. Now she’s back and educating people on the One Fair Wage ballot initiative that she says will raise the state’s minimum wage from $8.90/hr to $12 by 2022 and for tipped staff employees in the restaurant industry, from $3.38/hr to $12 as well by 2024.

“It’s not just an economic issue,” said Fonda. “It’s a gender issue because most of the people who work for tips and don’t make ends meet are women.”

According to the One Fair Wage organization, more than 70 percent of tipped restaurant workers in the U.S. are women and in Michigan, 80 percent. Nationally they suffer three times the poverty rate of the rest of the U.S. workforce.

“Mostly they’re working not at fancy restaurants,” said Saru Jayaraman, author, activist and University of California at Berkeley professor. “They’re working at IHOPs and Applebees and Coney Island diners and they’re suffering from the absolute worst sexual harassment of any industry in the United States.”

She said that every year the Department of Labor releases a list of the 10 lowest-paying jobs in the U.S. And every year 7 of those 10 jobs come from restaurant industry. So Tomlin, Fonda and Jayaraman are on mission to change that. They’re looking to collect 350,000 signatures to get the initiative on the ballot by November 2018.

“That means that between now and the midterm election, we’re going to be knocking on a lot of doors. I mean I’m not going to be but maybe you will be,” said Fonda pointing at Tomlin.

The crowd laughed. Fonda said “that’s how you win.”