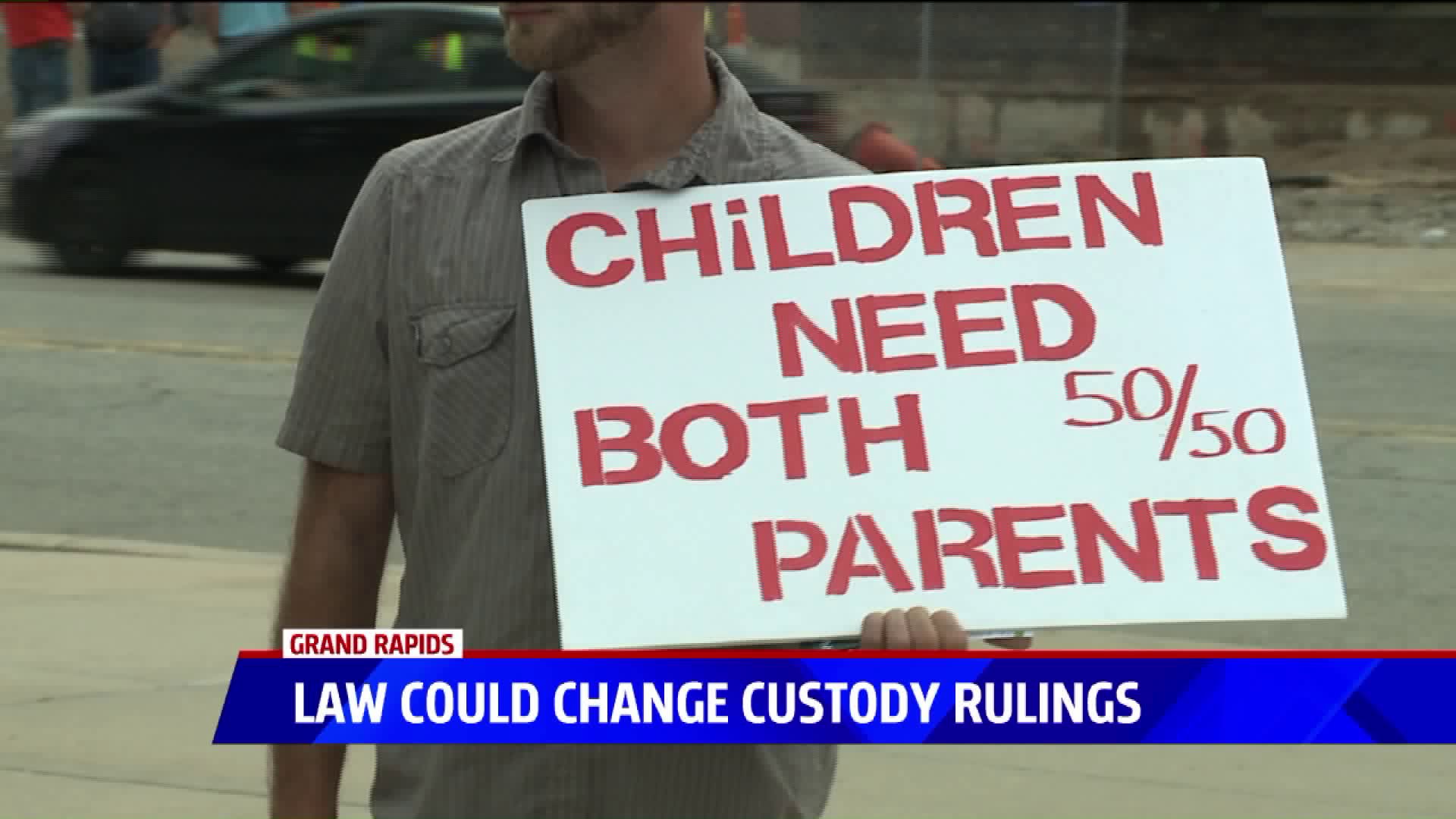 GRAND RAPIDS, Mich. - Automatic 50/50 child custody could become a reality for the entire state, now becoming a hot button topic as lawmakers advocate to send House Bill 4691, the Michigan Shared Parenting Act, to the house floor in the fall.

Friday, a group of supporters of the bill gathered outside of the courthouse downtown Grand Rapids, encouraging others to come to a town hall hearing later this month. The group passed out flyers for an event called Putting Kids First.  The town hall event with State Representative Jim Runestad (R-44th District) is Monday, August 21st, at 6:00 p.m. at 401 Hall Street SW in Grand Rapids.

The group is supporting Michigan House Bill 4691 which they say would fix the "heartbreaking and ineffective family court system across Michigan" that "negatively and unapologetically pits parent against parent and hurts children of ALL ages."

Advocates say the bill would allow for more equal parenting time for divorced couples with children. They believe people who have concerns with child custody, family court, parental alienation and parenting time should be interested in this bill.  The group has more information at MichiganSharedCustody.com.

Michigan law currently follows the Child Custody Act of 1970, operating case-by-case, awarding parents different levels of custody depending on a number of variables. The act currently puts the power in the hands of the court to decide.

Ryan Leestma, a father fighting for custody of his child believes the current law pits parents against each other.

"There's no judicial standard," said Leestma. "There's no burden of proof to show why a parent can't be a good parent. Basically, the cards are stacked against one parent over the other."

If the bill is passed, fathers like Ryan Leestma would be able to spend time with his children. But not everyone is on board with the possible changes. Some parents have raised concerns after suffering domestic violence in their marriage, worried new laws would give 50% percent of custody to people who should be anywhere near children.

"By the end of my marriage he was trying to drown my daughter in the kitchen sink, in the dirty dish water," said Paula Fitzsimons over the phone, a single mother who survived domestic violence. "When you get into court, now what? Automatically my kids would have to go with him 50% of the time if you have this automatic parent custody."

Fox 17 reached out to the sponsor of the bill, Representative Jim Runestad, who says divorcées who've suffered domestic violence have nothing to fear.

"If there's any evidence of domestic violence, the presumption portion (of bill 4691) is taken off the table and it's back to the old style of law," said Representative Runestad. "All the peer reviewed studies, 54 studies by 110 national experts across the globe, say joint custody is best for children in a divorce."

Advocates of the bill claim there's not a judicial standard, saying both parents deserve equal rights to their children. However, people opposed say the courts should be fighting in the best interest of the child and not for the rights of parents. Rep. Runestad says the bill could be up for a vote on the house floor as early as the fall. Click the link for all 27 pages of House Bill 4691.