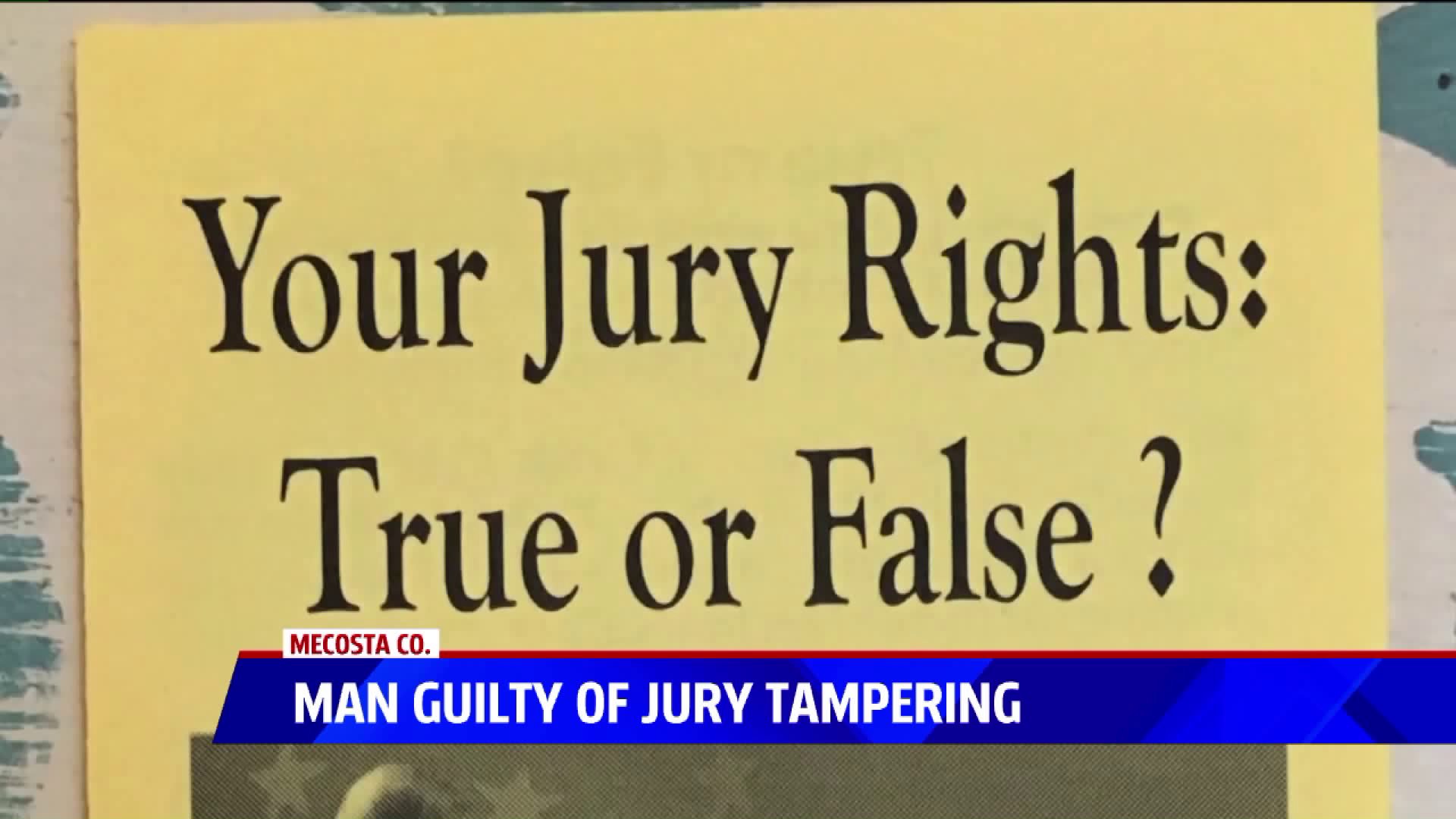 BIG RAPIDS, Mich. — A jury of six found Keith Wood guilty within 30 minutes Thursday, convicting him of attempting to influence a jury in Mecosta County.

The trial began Wednesday for Wood, who was initially charged with a five-year felony for obstructing justice after handing out juror rights pamphlets on the public sidewalk outside the Mecosta County courthouse. It's a case FOX 17's Dana Chicklas broke in December 2015 that made national headlines. His bond was set at $150,000. His felony charge was dropped last March and he was on trial for jury tampering, a one-year misdemeanor.

The case has unique First Amendment implications that gives some perspective on free speech limitations; however, Mecosta County Circuit Judge Kimberly Booher tried the case and ruled against the defense arguing much of First Amendment issues before the jury. She also previously defined that a juror includes anyone summoned for jury duty.

Moments after the verdict was read, FOX 17 asked Wood, "How does this make you feel about your First Amendment rights?"

On Nov. 24, 2015 Wood, now a father of eight and former pastor, was arrested after passing out about 50 Fully Informed Jury Association fliers on the sidewalk in front of the Mecosta County Courthouse on the day of another trial. The fliers discuss juror rights including those that are debated and often not read by judges in jury instructions: including a juror's right to vote their conscience, or jury nullification.

Wood testified in his own defense Thursday and refuted claims by another witness: he says he did not ask anyone walking into the courthouse Nov. 24, 2015 if they were a juror, and says he stayed on the sidewalk but never blocked an area.

Wood also says he learned of the case against Andy Yoder, scheduled for trial Nov. 24, 2015, through an email blast and was interested that the government had a say in someone's personal property rights. In that case, Yoder was accused of violating the Department of Environmental Quality for draining a wetland that was on Yoder's property.

That's when Wood says he went to Yoder's pre-trial conference, then ordered the pamphlets and went to the courthouse the day Yoder's trial was scheduled. Yoder is an Amish man and when asked by the jury, Wood says he has no ties to the Amish community other than buying produce from them locally.

"This pamphlet from beginning to end is designed to benefit a criminal defendant," said Nathan Hull, Mecosta County assistant prosecutor.

"Once again the pamphlet by itself, fine, people have views on what the law should be, that’s fine. It’s the manner by which this pamphlet was handed out."

Then, Wood's Defense Attorney David Kallman followed saying the pamphlets are historical and generic, they state nothing about the Yoder case or any Michigan court:

"It’s not enough to hand out a general informational brochure," said Kallman, "I understand why the courts, Judge Jaklevic, the prosecutor’s office don’t like it; they can disagree with it."

"I understand they don’t like it, but you know what, in our country again we can still speak freely. At least I think we can, and people can have differences of opinion."

At that point, after Kallman said "speak freely" the prosecutor said, "Judge!" and Judge Booher told Kallman to "be careful."

Previously Wednesday, Mecosta County District Judge Peter Jaklevic, former long-time Mecosta County prosecutor, testified. He said he was "very concerned" when he saw some of his jury pool carrying the pamphlets into the courtroom. The also magistrate testified earlier that he believes 12 to 20 people had the pamphlets.

"I thought this was going to trash my jury trial, basically," testified Judge Jaklevic. "It just didn't sound right."

Jacklevic ended up sending that jury pool home on Nov. 24, 2015 when Yoder took a plea.

Jaklevic continued to testify that he stepped into the hallway with Mecosta County Prosecutor Brian Thiede when Det. Erlandson and a deputy brought Wood into the courthouse that day. Mecosta County Deputy Jeff Roberts testified he "asked Wood to come inside because the Judge wanted to talk with him," then threatened to call a city cop if Wood did not come inside.

Wood testified Judge Jaklevic never spoke to him that day, or him any questions, before ordering his arrest. He tells FOX 17 he had concerns his case was tried in Mecosta County where all of this happened, involving several court officials including the judge.

"We did have this concern that this all happened, everything transpired with the actors of Mecosta County," said Wood.

"So our taxpayer dollars are paying their salary, and they were the actors in this case to arrest me, to imprison me, and all that. I did have a very great concern that they were the ones trying the case, because they work together day in and day out."

Kallman tells FOX 17 they will appeal this verdict.

"There were a lot of things we were prohibited from arguing to the jury," said Kallman.

"And of course, the First Amendment issues are critical: that we believe our client had the absolute First Amendment right to hand out these brochures right here on this sidewalk. That’s part of the problem of where we feel we were handcuffed quite a bit."