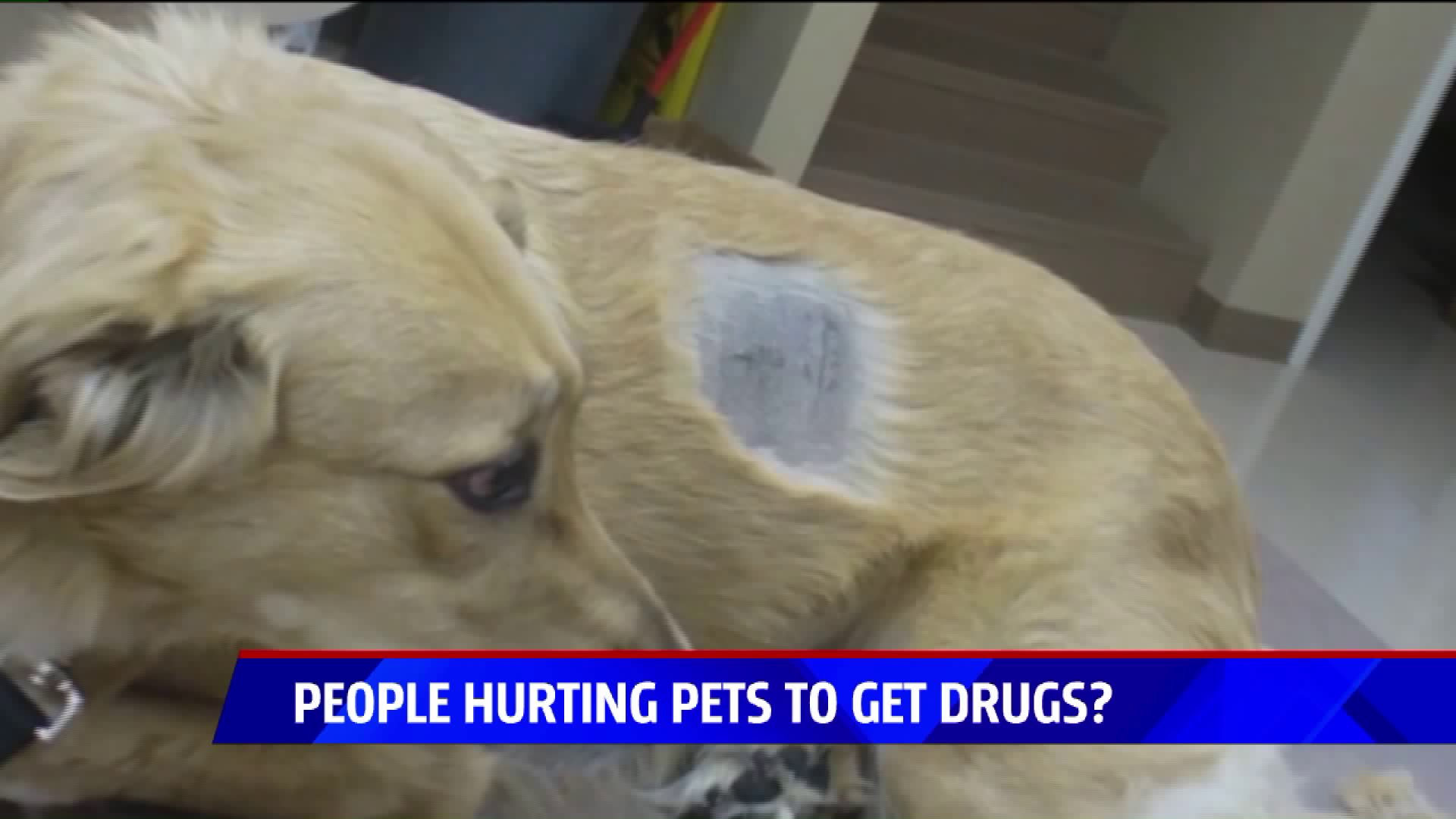 Drug addicts, in some extreme cases, have discovered a new opportunity to score their next fix: hurting their own pets to get the prescription pain pills.

Tramadol, which is traditionally prescribed for pain relief and arthritis in pets, is increasingly being sought by drug addicts who've discovered the painkiller can intensify a high when used in conjunction with other drugs, doctors say.

"It’s like a cupcake, which is probably better with frosting and sprinkles. Tramdol is the sprinkles," said Dr. Pete VanVranken, a Battle Creek-based veterinarian.

But unlike the more commonly abused Oxycodone painkiller, Tramadol is significantly cheaper, according to VanVranken, who says there are obvious red flags he watches for in pet owners who bring their animals to his clinic.

“We’ve had people use Tramadol too fast, and always the giveaway is they’re trying to put multiple pets on it," he told FOX 17.

"On our prescription refills, we always look to see when did they get it last, how long should it have lasted, and if they’re getting 30 days worth of Tramadol and it’s only lasting two weeks, we know that something’s going on there."

In the most infamous national case yet, Heather Pereira of Kentucky was sentenced to four years in prison in 2015 after she was convicted of animal torture and fraud for repeatedly cutting her pet golden retriever with a razor blade in order to get a veterinarian to write a prescription for the animal. It's reported the vet became suspicious when Pereira returned for pills three days after her initial visit—claiming her child had flushed the first bottle. But the 23-year-old did not have any children.

"A veterinarian better have stuff to back it up because this is a controlled substance and we don’t hand that stuff out like candy. It’s not meant to be handed out like candy."

The DEA classified Tramadol as a Schedule IV controlled substance in 2014, which means local vets are now required to document every Tramadol prescription they write, making it more difficult for addicts to game the system, he said.

Opioids remain the key culprit of overdose deaths in the United States, according to data from Centers for Disease Control and Prevention, which tallied more than 33,000 deaths in 2015. Michigan was among 19 states to see significant increases in drug overdose deaths during that same time period.

"We have to send everything we sell as a controlled substance, we have to make a log of that and it gets reported to the state of Michigan," VanVranken told FOX 17. "So at some point in time, somebody catches it some place."

"It's important because we need to know what a patient is receiving so we don’t give them too many medications and put them at risk for things developing an addiction if they don’t already have one or for making it easier for them to feed an addiction," Poland said.

In April, the MI Department of Licensing and Regulatory Affairs (LARA) launched an updated Michigan Automated Prescription System. The MAPS system provides detailed information and patient prescription history to allow doctors to more accurately track where and when individuals are getting painkillers. Lawmakers have also increased penalties for physicians and pharmacists who wrongfully prescribe controlled substances.

"If we limit that we can recognize patterns of behavior if somebody is going to see multiple physicians, filling prescriptions at multiple pharmacies; those are markers for concern for us," Poland said.

Poland says it's important to remember that, while the act of purposely harming a dog or cat for drugs might seem unthinkable for the average person, a drug addict is not of the average mindset.

"Addiction hijacks the brain, it takes control of very, very primitive areas of the brain that we don’t really have conscious control over," she said. "When somebody is in the throws of an addiction they actually have physical changes in their brain that result in the inability to process."

FOX 17 checked in with local country sheriffs across West Michigan—Allegan, Calhoun, Kalamazoo, Kent, Muskegon and Ottawa—but none could identify any recent cases involving animal torture specifically at the hands of an addict in order to obtain drugs. And because there is no conclusive data tracking cases of so-called "vet shopping," the level of widespread severity remains difficult to track.

VanVranken told FOX 17 he has never had an animal brought in with suspicious injuries, but has had cases of clients gaming the system in other ways to get prescription drugs.

"One client had two dogs put to sleep—one here and one in Detroit—but they kept picking up drugs for each dogs at the opposite clinic," he said, adding that it's more likely animal owners are abusing their pet's medication that's being prescribed for a pre-existing condition, which can be more difficult to spot.

"Certainly there are probably people who are using Tramadol on themselves who got it through their veterinarian, but probably at the very least what they’re doing is they’re splitting them with the dog and running out so quickly," VanVranken said. "I do think there’s [drug] abuse, but I don’t think it’s a widespread issue.”