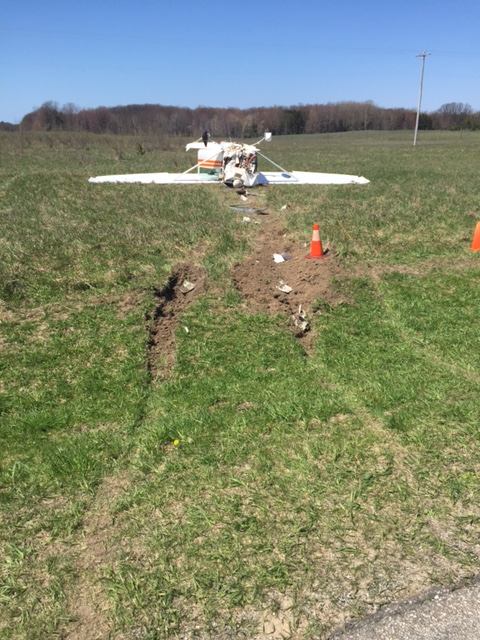 MASON COUNTY, Mich. — Four people walked away from an airplane that crashed at midday Sunday in Grant Township.

At 11:25 a.m. Sunday, the Mason/Oceana County 9-1-1 Center received a citizen’s call reporting a plane crash in the area of Sass Road and Morton Road in Mason County’s Grant Township.

The aircraft, a 1964 Cessna 182G Skylane with four people on board, was traveling from Hessel, Mich., in the Upper Peninsula to Hastings when it reportedly experienced engine problems. The pilot told deputies he attempted an emergency landing by turning from a southerly direction to the east and then to the west.

The aircraft narrowly missed a tree line, skipped across Morton Road, struck a ditch, and overturned.

The pilot, a 39-year-old man from Caledonia, and his three passengers are currently being treated for minor injuries at Spectrum Health Ludington Hospital.

The passengers were the pilot’s 71-year-old father and 12-year-old son, also from Caledonia, and his 12-year-old nephew from Grandville.

Sheriff Kim Cole said the case will be turned over to the National Transportation Safety Board, which has been notified and is responding to the scene.