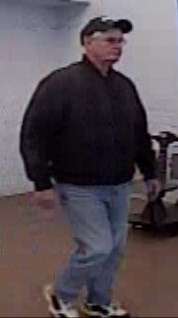 The first incident was reported last week at the Target store in Union Township. Since, the sheriff says they are investigating approximately 10 incidents in the county and another two outside of the county.

The sheriff says that on Friday night, a victim called deputies after a similar incident at the Walmart store off Encore Blvd. in Union Township. The surveillance photos come from that location, showing the man they believe to be the suspect and his vehicle.