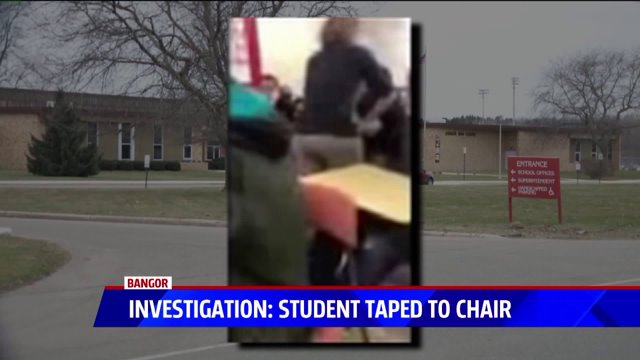 BANGOR, Mich. — Bangor Police Chief Tommy Simpson was among the dozens of people who attended Monday’s school board meeting where p voiced their concern over a video of teachers and staff playing an inappropriate game. Afterwards, a few students walked up to him with something they wanted him to see.

“We had some students approach us and advised that another student had been duct taped in class during the day,” said Chief Simpson. “By the time we started conducting interviews, [the school] already made personnel decisions, and the teacher involved in this had resigned.”

Chief Simpson interviewed everyone involved on Tuesday, he said, including the teacher and student. When the teacher asked the class what they did over the weekend, the 16-year-old student began to describe his time off using hand gestures. The chief learned that the student typically speaks with his hands.

“The teacher then went grabbed a roll of duct tape and started duct-taping the student's upper arms and chest,” said Chief Simpson.

The incident was filmed by another student in class, Simpson said. Some of the kids were laughing, including the student who was duct taped. However, he apparently he felt differently later on.

“The student who was duct taped said that he was embarrassed by it,” said Chief Simpson. “It was an uncomfortable moment for him.”

Attorney Robert Huber, whose firm represents over 400 Michigan school districts including Bangor's, said he’s seen a picture of the incident and considered the incident to be a classroom prank done in "poor taste."

“As soon as we learned about this, that teacher has since resigned because we intervened,” said Huber during a phone interview.

The investigation is ongoing, said Chief Simpson. It’s now in the prosecutor's hands, and that office will determine if malice was involved and whether charges should be filed against the teacher. He advised that anytime a student sees something inappropriate, that he or she should inform law enforcement and the school staff immediately.