Calvin college student discovers star that will explode in 2022 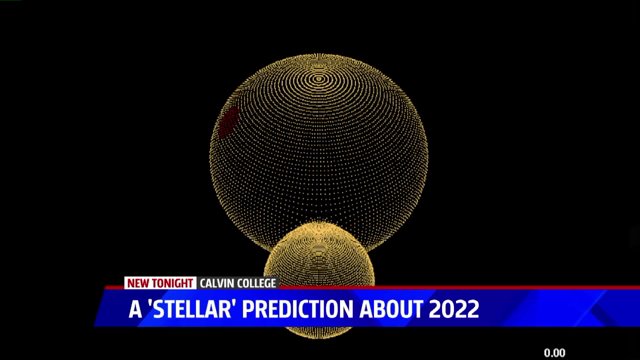 GRAND RAPIDS, Mich.—  Two West Michigan astronomers from Calvin College have a groundbreaking theory. They believe they found a star that is bound to explode in the year 2022.

Not only will studying it give scientists information they have never had before, specifically on why stars explode in the first place and under what conditions, but it will put on quite the light show for anyone outside or interested in star gazing.

Dan Van Noord, a former Calvin student and current software engineer, first noticed the star in 2013 at a conference in East Lansing on variable stars with his professor Lawrence Molnar.

“They weren’t sure just then, but Dan actually proved it was a contact binary star, and I said ‘OK, let’s check it out,’” said Molnar.

So what’s a contact binary star? Believe it or not, roughly half the sky is made up of them.

“These are two stars so close to each other that they actually share one atmosphere more like a peanut with two nuts in it rather than two separate things,” said Molnar.

Simply put, eventually these stars will fall into each other, causing an explosion. This will happen on the constellation known as Cygnus or the Northern Cross.

That specific constellation is highly visible in the summer over Grand Rapids. Right now the star is so faint we can’t see it from Earth, but that will change. The star will turn into a red nova right on that constellation.

“What’s really striking about this result is that it’s very unlikely to find the next star that is going to merge,” said Molnar.

Right now little is known about what causes binary stars to explode, and how long it takes, and under what conditions.

Van Noord did manage to find this one based on observing its orbital period. The give-away was that the period kept getting shorter and shorter the closer he got to the current day. The fact they found this could lead to a conclusion that no one has been able to uncover yet.

“If a theorist can then account for this explosion then we truly have insight as to what makes them explode, and we don’t know what makes these explode. This is a golden opportunity to learn that,” said Molnar.

Molnar and Van Noord have been observing the star for the past four years, and found data from a different scientist studying that same area for a different reason, and have been able to use that information dating back to 1999 as well.

Astronomers will be able to give advance notice on when the explosion will happen, so that we can go outside and see it too. Molnar and Van Noord are confident their research points to an explosion.

“I can’t wait to point a telescope up at the sky and see it rising in brightness and see it with my eyeball,” said Van Nord.

On the off chance that he’s mistaken, either way it’s a once and a lifetime chance.

“Most astronomy is done by looking at stuff that changes over millions or billions of years. This is something I can look at and say in my lifetime I get to see the results of my research whether I was right or wrong,” said Van Noord.

Van Noord and Molnar said they were able to do this research thanks to Calvin College, who provides a telescope for them to use, and allowed Dan to take a chance and study a theory he thought to be true.

The telescope is opened to the public every Wednesday on clear nights only at Calvin College. For more information on their telescope and when you can go head to their website.