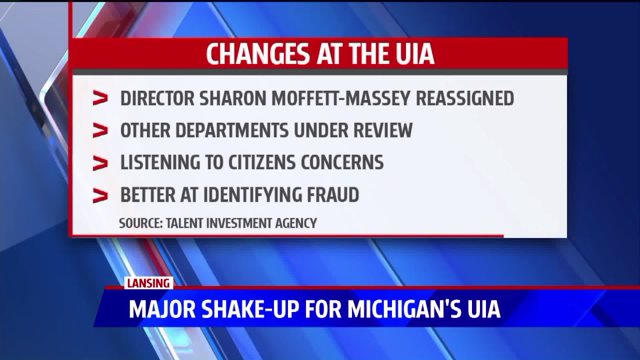 LANSING, Mich. - The Michigan Unemployment Insurance Agency director has been removed from her position, according to the Talent Investment Agency. This and other changes come after years of complaints from residents.

The FOX 17 Problem Solvers have been investigating claims for nearly two years of people being erroneously accused of UIA fraud by a computer system that lacked human intervention.

Wanda Stokes, the Director of the TIA, which oversees the UIA released a three-point plan Thursday to improve the unemployment system.  The three points are customer service, organization evaluation, and identifying and addressing fraud.

UIA Director Sharon Moffett-Massey has been reassigned but will still be part of the TIA team, according to the press statement.  Bruce Noll, the TIA's legislative liaison will be the new Acting Assistant Director of the UIA and will lead during a national search for a replacement.

In addressing the problems unearthed by FOX 17, the agency said that there will be changes to make sure that the staff reviews potential fraud cases, instead of relying on computer software.  They said they will also address how resident interact with the agency by phone, online, on mobile devices and in person.

“We need to work quickly,” Stokes said in a press release. “At all times we must remember that we are here to serve our state’s residents and employers. When people are looking for work, they look to us for help and we must do our best to get them the help they are entitled to.”

"Instead of promptly addressing the problem, Gov. Rick Snyder waited until today to hold the agency’s director accountable. The Snyder administration's lack of urgency resolving this problem is deeply disappointing. Michiganders count on their government to act in their best interest, and it’s a shame that once again, Gov. Snyder failed to do that in a timely fashion."