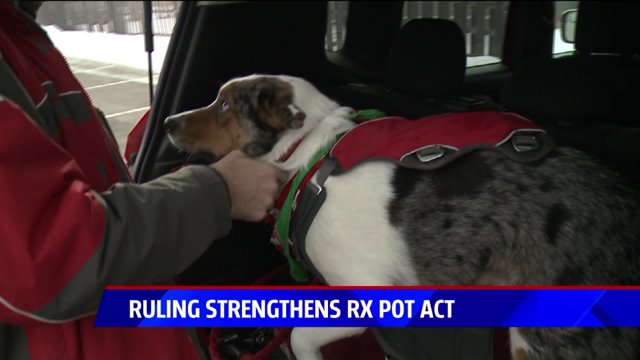 In other words, if you're a card-carrying patient or caregiver in compliance with the MMMA, you have the clarified right to carry your medicine in the car, for example in the glove box instead of in a locked case in your trunk. It's a misinterpretation until Wednesday that's cost many Michiganders misdemeanor convictions and fines, including the defendant in this case, Callen Latz.

Though as Latz knows, this misdemeanor conviction can cost much more than fines. Among other things it banned regular activities, like volunteering at the hospital with his service dog.

Opening his car's trunk Thursday, 29-year-old Latz called for his service dog Harvey and put on his harness. He's a card-carrying patient who's had Harvey by his side the past three years.

“I’m kind of a straight-edge person," said Latz. "I almost became a police officer but on the account of my eye I actually can’t go onto the force.”

Latz has excruciating migraines and lives with ongoing conditions including blindness in his right eye since he was younger than two.

“When I was arrested we spent two hours on the scene, and there was kind of an argument like, 'should we arrest them?'" recalled Latz. "[Harvey] was there the whole time, so he ended up getting impounded along with my vehicle.”

Pulled over after a concert in 2014, things got worse: Latz was arrested for having a legal amount of pot in the car; his service dog was taken to the county pound; and he went through a jail experience he calls "degrading" when deputies announced part of his HIPAA records.

"I definitely think it was against the civil liberties of patients, it’s a predatory law," said Latz. "I mean it was only set in place to criminalize patients.”

Latz and his attorney, Josh Covert, call the illegal marijuana transport law that got him arrested "predatory." Lawmakers passed it in 2012, four years after a majority of voters in every county statewide passed the MMMA. Though ignorance of a law is no defense, many were unaware as illegal transport is mentioned nowhere in the MMMA.

“For the most part I think the rights of the people have been trampled upon, especially by the legislature when they created this act, like the improper transport statute." said Covert.

"They didn’t bother to put it in the medical marijuana act where people would actually that have cards would see it. It seems to be somewhat law by trickery where they’re hiding it somewhere else where people wouldn’t even know to go," he said.

Wednesday's Court of Appeals' ruling overturned Latz's misdemeanor conviction. Covert believes anyone who's pleaded guilty to illegal transport in the last six months, or those with pending cases, now have a viable defense.

Again the ruling sets the precedent that the MMMA overrules improper transport and states:

The ruling goes on to state:

“I like what the Court of Appeals did in this, I think it’s a step in the right direction but I think it’s like a band-aid over a bigger problem, and that is the legislature, along with the judges and prosecuting attorneys, seem to ignore the intent of the law," said Covert.

Now Latz is working to put together a class-action lawsuit for others affected by illegal transport. He's asking others who know how to take the next steps contact him at: callenlatz@gmail.com.

FOX 17 called the Clinton County Prosecutor's office, which tried this case, and has yet to hear back as of Thursday evening.