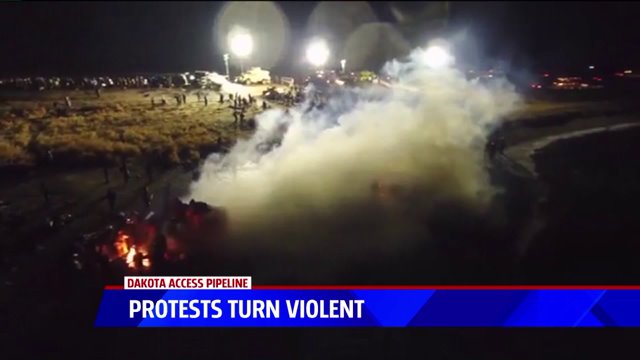 BATTLE CREEK, Mich. — Plans for a 1,200 mile oil pipeline that would pump hundreds of thousands of barrels of crude oil from North Dakota to Illinois daily has lead to protests in recent months which have turned violent at times.

The multi-billion dollar Dakota access pipeline has been discussed since 2014, but the uproar from the Standing Rock Sioux tribe and environmentalists about the impact to the local water supply is growing by the hundreds, even thousands.

Two of the protesters who call themselves 'protectors' just returned to West Michigan following a weekend they said was violent and volatile. They said they were wrongfully targeted with concussion grenades, tear gas, and rubber bullets.

“We had our hands up, we told them that we were unarmed and we are peaceful," said Chad Wethington. "It was kind of ironic because that’s when a bean bag grazed my leg. Tear gas, grenades, rubber bullets right off the bat."

Wethington  spent several days at Standing Rock. He is Native American and expects to peacefully protest the pipeline being built.

“It didn’t even feel like we were in our country it felt like we were in a different country," he said. "It was just sickening. People with their arms up saying we are unarmed we are peaceful. The police were at no threat."

Wethington said some 'protectors' wanted to move a vehicle blocking the roadway for medics to get in and out, and when they did that, they were fired at without warning with concussion grenades, rubber bullets, and tear gas.

“There was nobody that rushed the police or physically threatened an officer whatsoever,” Wethington said.

Wethington claims he was tear gassed while trying to help other people, and hit with a rubber bullet. But Wethington considers himself lucky compared to what happened to 21-year-old Sophia Wilansky.

“Intentionally a police officer threw a grenade that hit her right in her forearm and exploded right as it hit her forearm,” said Wayne Wilansky, Sophia’s father.

North Dakota Highway Patrol has denied there was any concussion grenades used.

“There is no merit to that, but I assure the citizens of North Dakota, the citizens of Bismarck Mandan area that law enforcement is investigation this, and all the facts will be out there, it’s still being looked into, there’s still interviews that need to be conducted,” said Lt. Tom Iverson of the North Dakota Highway Patrol.

Law enforcement instead said they found a punctured propane cylinder, glass jars, and rocks in the area where the explosion went off. They said those are materials generally used to make a Molotov cocktail. They added they saw protesters or protectors run from that area.

Despite the violence, Wethington hopes to return soon, and stand with the tribes for as long as it takes.

“They are not going to go anywhere because their entire water source is at stake,” said Wethington.

According to the chairmen of the Standing Rock Sioux Tribe the US Army Corps of Engineers plans to close the area in North Dakota where people have been camping for months to protest the Dakota Access Oil Pipeline. He said he received a letter from the corps on Friday evening which says all lands  north of the Cannonball River will be closed on Dec. 5. He said the letter indicates a free speech zone will be allowed south of the Cannonball River.

The concerns for the Standing Rock Sioux are not just over the water supply. They said the construction on the pipeline will also destroy the sacred burial and prayer sites.

On Dec. 4 hundreds of veterans are planning to make the trip to Standing Rock to join in on the demonstrations.