Pizza-loving dog missing for 6 weeks: Have you seen Harper the Great Dane? 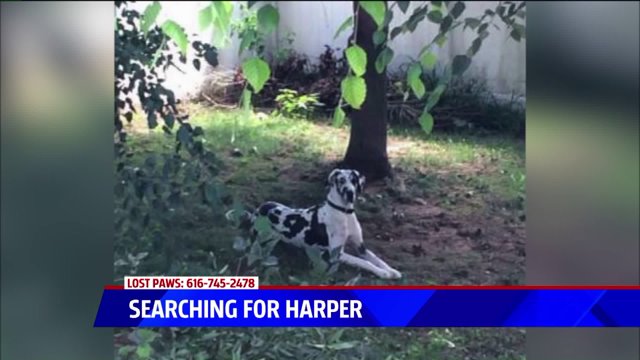 WYOMING, Mich. -- It's been three weeks since the 7-year-old Great Dane named Harper was last spotted, and her family says the best way to catch her is using pizza.

Harper's been missing for nearly six weeks, and is now getting tracked by one of West Michigan's only licensed pet finders. Lindsey Sturgeon, owner of Lost Paws, said the dog was last seen at the interaction of Ivanrest and M-6 after escaping from her grandmother's home.

"We’ve had several situations where we’ve seen her in this area, she has physically seen her owner and run from her," said Sturgeon.

After a year in business, she's now searching for her biggest catch yet, a 110 pound Great Dane, all with the help of volunteers, three latching cages, four trail cams, multiple drones and multiple pizzas.

Despite whether or not the pizza will reel in the big catch, Lindsey has high hopes for Harper's return. Unfortunately, her search has encountered problems.

"We've had to have the police out several times. The owner showed up to check the cams and the hunter said, 'you better hope that you get here before I do because I'm gonna shoot her.'"

Those threats and the incoming cold weather have Lindsey and her team racing against the clock.

"She's either moved to a new location with lower population and we're not seeing her or they [the hunters] did follow through and they've gotten rid of her in some way."

There is a cash reward for anyone with a tip that leads to a successful catch of the dog. You can follow the team's success by following Harper's Angels Facebook Page or you can request help finding your pet at the Lost Paws LLC web page.