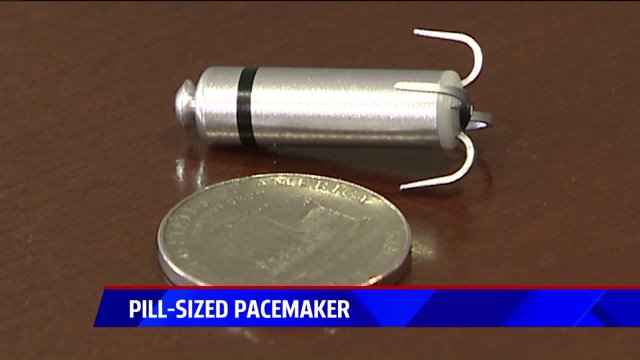 GRAND RAPIDS, Mich. -- A man from Kent County is the first patient in West Michigan, and the fifth statewide, to receive the world's smallest pacemaker.

On an unusually warm and sunny Friday in November, retired dentist Dr. Herbert Carpenter smiled walking up to the Kent Country Club golf greens. After undergoing the pacemaker procedure Sept. 28 he was quickly back to golfing, now exercising at least three times per week.

When FOX 17 asked how he's feeling today, he said, "probably just as good as you feel. We’re both smiling, and happy to be out on a day like this.”

Inside Dr. Carpenter's heart is a pill-sized pacemaker, the Micra Transcatheter Pacing System, that's about one-inch long and is a single-chamber pacemaker.

“It’s like a little .22 bullet, and it’s got three little hooks, looks like fish hooks on the end," said Dr. Carpenter.

And just like Dr. Carpenter's hole-in-one putt warming up, the Micra is a pacemaker and lead - or wire attached to the standard pacemaker - all in one.

His procedure at Spectrum Health Fred and Lena Meijer Heart Center was documented by Spectrum Health Beat, and is performed through the groin as opposed to making larger incisions in the chest to implant a standard pacemaker.

“I’m so glad I did it, and I would highly recommend it," said Dr. Carpenter.

According to Dr. Nagib Chalfoun, Spectrum electrophysiologist, the procedure to implant a Micra is more comfortable for patients and allows quick, even same-day recovery.

“With this procedure, it’s done all through the groin, through one sheath, one catheter, basically a poke that heals, almost like a big IV if you would," said Dr. Chalfoun. "Many patients would not know it’s there.”

Other benefits of the Micra according to Dr. Chalfoun are:

As for Dr. Carpenter, healed from his procedure he is back to enjoying retirement with family and much to look forward to.

“[Family will] be down for Thanksgiving, that’s what I’ll do: I’ve got the table all set already," he said and smiled.