SAULT STE MARIE, Mich. — A man is facing federal charges after authorities say he tried to smuggle thousands of dollars worth of drugs into Michigan through the International Bridge Plaza.

On November 9th, an officer with Customs and Border Protection (CPB) stopped Mayooran Rajasingam in a 2017 Hyundai Tucson rental car when he and another individual were apparently trying to cross the bridge in Sault Ste Marie into the State of Michigan from Canada.  The officer allegedly smelled marijuana on the two, and says they eventually handed over a small amount of it from Mr Rajasingam’s pocket.  He is also said to have told the officer that he was born in Sri Lanka.  Officers say neither of the two had the proper immigration documents to legally enter the country.

When officers searched the rear part of the vehicle, they discovered a travel bag with a seemingly suspicious Frosted Flakes cereal box.  Inside, they say they found three bags packed with drugs. 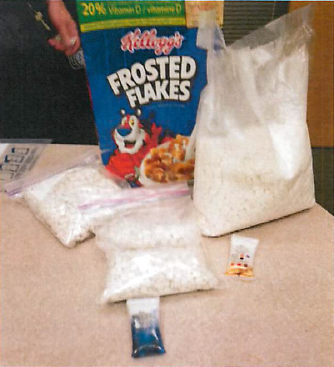 Authorities say in one bag there was 2023.8 grams (nearly 4.5 pounds) of Methamphetamine.  In the other two bags, they reportedly found another 914.4 grams (a little over 2 pounds) of MDMA.

Officers say the other occupant of the vehicle told them he was an Uber driver and was promised $600 to drive Rajasingam.  The man eventually charged with ‘Conspiracy to distribute & possess with intent to distribute a controlled substance’, Mayooran Rajasingam, allegedly told authorities that he was being paid $1,000.00 by a drug dealer in Canada to transport the bag that contained the drugs.  He told them that he thought there was only cash inside the bag and was not aware of the drugs.

Rajasingam is expected back in court on November 17th.