Man claims to have spotted Heeringa in cousin’s basement 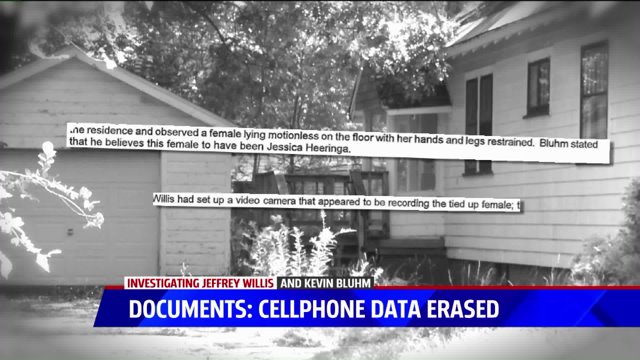 Jeffrey Willis stares into the crowd and TV cameras during his preliminary exam.

Jeffrey Willis is the prime suspect in both cases, as well as the abduction of a teenaged girl in 2016.

Kevin Bluhm, a corrections officer, is Willis' cousin and will be sentenced later this month for lying to police during the course of a felony criminal investigation.

In June, when a state police detective went through Bluhm's phone, the detective found everything prior to Willis' arrest had been erased. Another detective asked Apple to preserve the information in Bluhm's iCloud account.

During interviews in June, Bluhm revealed startling information tied to Herringa's disappearance. He told detectives he saw a 'blonde female' tied up in the basement of a home that used to belong to Willis' grandfather in Norton Shores.

Bluhm said Willis asked him to stop over there in late April 2013, the day after Heeringa disappeared.

Bluhm recalled the 'blonde female' wasn't moving and told detectives it appeared the woman was being video taped. He said he believed it was Jessica Heeringa and also admitting to helping Willis dispose of the woman's body.

But later, Bluhm said this was all not true.