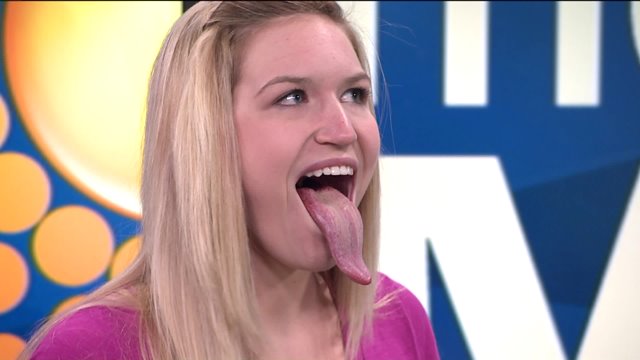 There are things that make us do a double, maybe even a triple take, adn sometimes things that are just hard to look at all together. All of these weird and unusual things can be found in a new book out by Ripley's Believe It or Not!

"Ripley's Believe It or Not: Unlock the Weird" is the newest book in the series, showing off lots of fantastic, fun, and even freaky stories from all around the world.

18-year-old Twin Lake resident, Adrianne Lewis, is one of the people featured in the book. She has the longest tongue, measured out to be four inches in length.

She can touch her nose, chin, and elbow with it. She can even touch her eyeball if she uses a finger to give her tongue a little extra reach. Watch the video above to see her in action.

Lewis said that she wasn't discovered by the writers of the book, but rather she was able to get in the book by contacting Ripley. She sent them an email telling them about her unusually long tongue, and it just took off from there.

Lewis isn't the only person from West Michigan to have made the book, there are five other people from Grand Rapids mentioned in the book as well.

The book is available to purchase at all major book stores for about $28.95.