Family, friends on scene as body of missing fisherman found in river 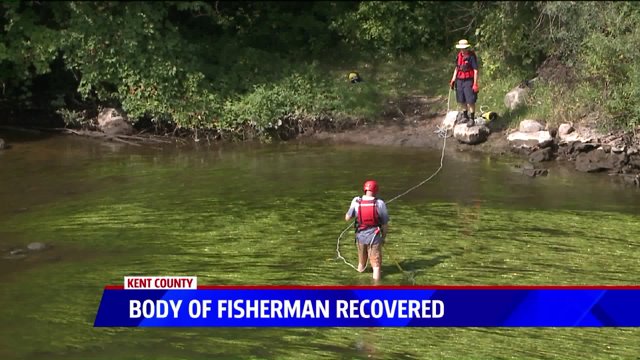 CALEDONIA TOWNSHIP, Mich. — As dozens of relatives and family friends looked on, crews retrieved a body from the Thornapple River, believed to be a fisherman who went into the river on Sunday.

Police identified the fisherman Monday afternoon as a Nijaz Mulac, 45, of Kentwood.

The search resumed Monday morning near Ruehs Park after being called off Sunday evening. Mulac  went missing Sunday morning while fishing with his 14-year-old son and a family friend.

We're being told to turn our cameras off as crews bring the man's body to shore. Several family and friends on scene @FOX17

Authorities said Mulac was fishing along the shoreline when he slipped. He was wearing waders, which are believed to have filled up with water, police said.

Friends and relatives at the scene Monday morning told FOX 17 that Mulac was an experienced fisherman and knew what he was doing.

"He was the nicest, nicest person ever," said a woman on scene whose husband was fishing with Mulac and his son on Sunday. She said Mulac's family had remained hopeful he would be found alive.

Just after noon Monday, crews announced they had found a body roughly 30 feet from shore, not far from where Mulac had last been seen.

“It’s horrendous any time you see somebody in distress like that, but for a family member to witness that is traumatic," said Lt. Jeff Mcalary with the Kent County Sheriff's Office.

Police said Mulac fished regularly but Sunday was his first instance fishing in the Thornapple River.

Crews shut off the 84th Street dam to lower the water levels to aid in the search, which was made more difficult by extremely low visibility in the water.

“It’s very difficult to see in this water because it’s colored and murky," Mcalary told FOX 17. "Even the divers in the water had trouble seeing, so r recovery like this is basically done by feel.”