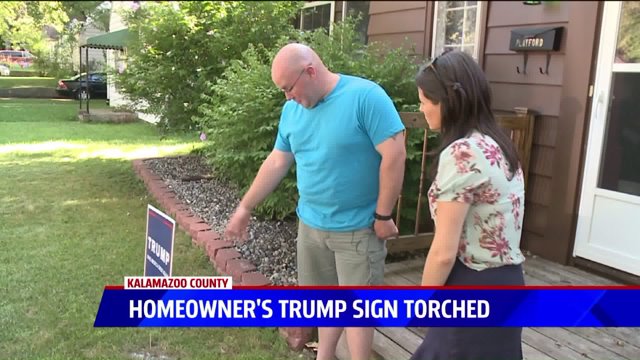 KALAMAZOO, Mich.-- The presidential race is heating up in more ways than one. A Kalamazoo man came home from work Monday morning to find his Donald Trump campaign sign in a pile of ashes on his front lawn.

L.J. Playford returned home after a 24-hour shift as a firefighter to find his lawn sign destroyed. He was angry and a little sad, but didn't think twice before replacing it with a new one.

"At first, I thought somebody just lit my yard on fire, then I realized my political sign was gone with the exception of the frame, so I obviously got a little irritated that someone trespassed and lit my property on fire," said Playford. "So I went inside, grabbed a second sign and I slid it on the frame out of principle."

But Playford was more upset about the bigger issue at hand.

"This is the point we've reached where we have an entire sector of society that will preach open-mindedness until you disagree with them," said Playford. "This is their idea of political protest: destruction of property and committing arson as opposed to engaging in a critical thought and critical discussion with somebody."

Other families in the quiet neighborhood don't have lawn signs. Playford says this has happened to other people he knows. "We had one gentleman up around the corner on East Main who had a couple of Bernie Sanders signs stolen earlier in the year," said Playford. "Unfortunately it wasn't just a case of the candidate I'm supporting, it was a case of other people, and it's just as wrong."

Playford said he has noticed people are avoiding putting stickers on cars out of fear they'll be vandalized, but he's not letting that stop him from expressing his right to support a political candidate.

Playford says he doesn't know who might have burned his sign, but he doesn't believe any of his neighbors did it. He does think he was targeted for his sign, though, because there was no damage done to other parts of his property.