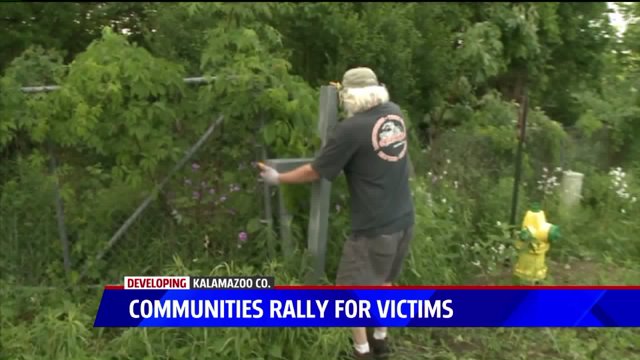 KALAMAZOO COUNTY, Mich. — Five people were killed and four others were injured Tuesday evening after a truck crashed into a group of bicyclists in Kalamazoo County.

The crash happened just before 7 p.m. in the 5500 block of N. Westnedge Avenue, according to Kalamazoo County Undersheriff Paul Matyas.

Kalamazoo County Prosecutor Jeff Getting said in a press conference Tuesday night that a 50-year-old male driver is in custody in connection with the crash.   He was arrested near the crash scene.

Getting said police received calls about a pickup truck driving erratically prior to the crash.

Markus Eberhard told FOX 17 said he was almost hit by the driver before the bicyclists were hit.

"I don’t know who it was, someone told me to watch out and then he almost hit my foot," he told FOX 17. "I stepped back, blacked out, my body froze and before I could tell the bikers to watch out. That's when I heard a bunch of bikes hit his truck."

Two of the people injured in the crash are being treated at Borgess Medical Center. One of them is in critical condition and the other is in fair condition, according to a Borgess spokesperson.

The other two victims are being treated at Bronson Hospital, according to a hospital spokesperson.  They are both listed in serious condition. All victims were adults, Getting later clarified Tuesday night.

Getting grew visibly emotional as he spoke about the community, still coping following the deadly February shooting rampage that left six dead and two injured.

"I'm at a loss to describe the impact to the community from these incidents," Getting said. "I have every confidence in Kalamazoo and I know how the community will respond to this," Getting continued. "I just wish we had more of an opportunity to get our feet under us before we had to do it again."

Getting said all of the victims are adults.

Westnedge Avenue was shut down after the crash but had reopened as of 11:45 p.m. Tuesday evening.

Authorities are still working to identify victims and notify families, and will not release any names until that process is complete.

Prosecutor says Kalamazoo will rally around families of victims- added he just wishes the community "had time to get our feet under us".