Lead poisoning cases on the rise in Grand Rapids 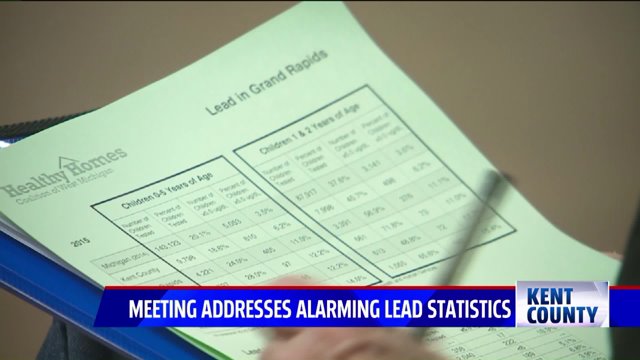 GRAND RAPIDS, Mich. – Parts of Kent County are showing alarming levels when it comes to lead levels in our kids, showing increased numbers since 2000.

A town hall meeting Thursday in Grand Rapids addressed concerns over lead poisoning in kids. The big worry isn’t water like in Flint, but lead paint in the home. Some new statistics were difficult to process for those in attendance, including Grand Rapids having more lead poisonings than Flint.

Among 9,798 children tested in 2015, 610 were identified with lead poisoning. Paul Haan with the Healthy Home Coalition of West Michigan said that number is rising for the first time in 16 years.

“In Grand Rapids we know that 40,000 homes potentially have a lead hazard,” said Haan. “Thankfully kids don’t live in all of those, they live in about 3,000 of those.”

“We see a higher percentage of lead poisoning in those among African Americans,” said Haan. “And that’s an African American community linked to those homes and what’s systemically happened over the years.”

City and state officials in attendance listened to the alarming stories of families suffering long-term effects of lead poisoning.

Juanita Sanchez and her three-year-old daughter is one those now living in a motel because her home had lead levels three times above the safe threshold.

“Well she got diagnosed with lead poisoning actually twice in the same house she was born in,” said Sanchez. “The land lord told me it was lead free and it wasn’t lead free. It’s heartbreaking actually because she has down syndrome as it is and on top of that, to add lead poisoning to that, I don’t know what effects it’s going to have in the future for her.”

“We need incentives for people that can’t help pay for this problem,” said Haan. “The people that can’t pay they need to be encouraged to just do the right thing by kids. It may cost them a little bit of money but it protects that child.”