Babies born drug addicted: An epidemic on the rise 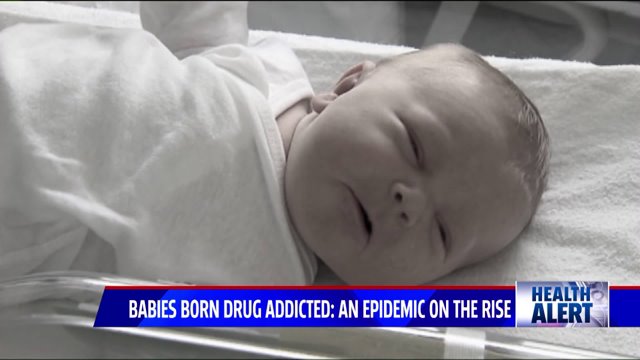 GRAND RAPIDS, Mich. -- Babies being born addicted to drugs is an issue that delivery rooms are seeing more and more of every day.

The Centers for Disease Control and Prevention (CDC) has proclaimed opiate addiction a national epidemic, and mothers bringing new life into the world are part of it.

Dr. Beaumont says that prescription narcotics are a big culprit when it comes to infant addiction cases, and women are surprised and devastated to find out that their baby has withdrawal symptoms.

"Most of the moms that are involved with this problem were given a prescription, weekly, for a narcotic," he said.  "They took them for good reasons in the first place, but I don't think they are taught very much by the prescribing doctor the dangers of these drugs, that you could become addicted to it.  If you get pregnant, your baby could end up being born addicted."

It's a problem that Cara Tatarelli, 23, experienced during her pregnancy.  Her now 3-year-old daughter Gianna was born addicted to pain killers and heroin.

Tatarelli was only 13 when she started experimenting with drugs and alcohol.  At 17, she started using opiates and she says it just got progressively worse.

"It eventually got to that point where I thought and felt like I couldn't stop even though I wanted to," she said.

She was upfront with her doctor about her drug problem during her pregnancy.   Four months into her term she stopped using drugs.

However, there are risks associated with stopping during pregnancy.

"The baby itself is going through the withdrawal symptoms in utero," Dr. Beaumont said. "You have no idea of knowing how severe the symptoms are in the baby because you cannot see it."

Tartarelli says it's because of her daughter that she's sober today.  She has gone from homeless and drug addicted to an attentive mother putting herself through nursing school.

Dr. Beaumont said he sees about 100 babies a year whose mothers are addicted to prescription narcotics like pain killers.

"I think narcotic prescriptions have gone through the roof," he said.  "It's a huge problem."

The CDC said enough prescription painkillers were prescribed in 2010 to medicate every American adult around the clock for a month.

Dr. Beaumont says that doctors are prescribing these medications but aren't educating their patients on how this could affect them or their unborn child in the future.