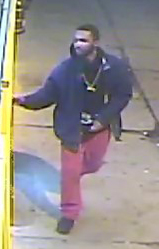 Police say a man drove up in a white van, got out of the vehicle and opened fire.    One teen was shot in the leg, the other in the foot.

In addition to images of the suspect, police also released an image of the van, which they say is possibly a 2004 or 2005 Dodge Caravan.