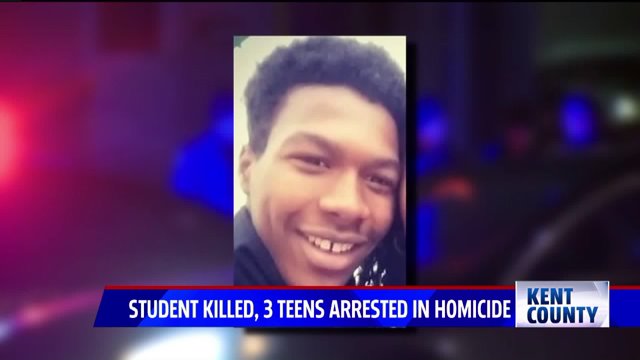 WYOMING, Mich. — The shooting death of 17-year-old Isaiah Blue came as a shock to all who knew him. Blue died after he was shot Wednesday night by pursuers after he left a Rapid bus on 44th Street at Rhodes Avenue. Tips to police led to the arrests of three young men.

FOX 17 News talked to one of his close friends, and the superintendent of Kelloggsville Public Schools.

Martell Phillips said he was one of Blue’s best friends. Blue liked sports, hanging with friends, and making people laugh. “I’m going to miss him," said Phillips. "It’s crazy. I can't believe it. I really can’t."

Phillips has known Blue since middle school and even though Blue had moved around a lot over the years, Phillips said they always kept in touch.

“He called me a brother, so I just took him in as a little brother, and that’s how it was. He just came over all the time."

Blue never never got into trouble, Phillips said. “Blue was probably at the wrong place at the wrong time. He was probably on his way home. Nobody knows. Blue was never in no trouble. Blue was always the happy person. Just a happy kid. He just wanted everyone to be happy. That was Blue."

Kelloggsville Superintendent Samuel Wright said Blue’s only trouble was being late to school from time to time.