With industry on the rebound, pols tour Detroit auto show 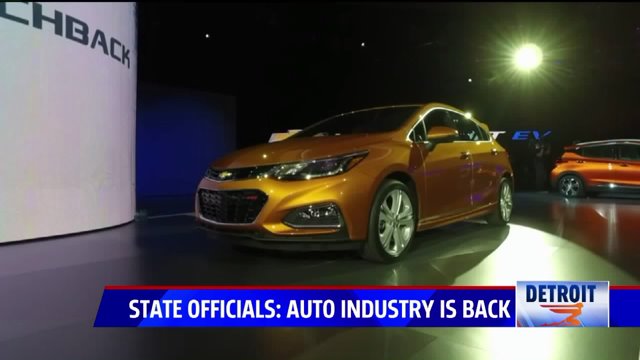 DETROIT — Sitting in the driver's seat of the newly unveiled Chevrolet Bolt EV on Monday, Sen. Debbie Stabenow, D-Michigan, said she'd rather not remember a time just a few years prior when things were far less rosy for the industry.

“There was a point where we walked through, probably 2008 or 2009, and I wanted to jump off the top of the building," Stabenow said, recalling the bankruptcies of General Motors and Chrysler and the federal bailout.

"It was very depressing and it was very scary. But people did what we do in Michigan: put our heads down, worked hard, innovated and stuck with it and the comeback is real."

With sales hitting historic highs of 17.5 million for 2015, there's little argument the automotive industry is back on the rebound.

Stabenow, along with the rest of Michigan’s congressional delegation took the opportunity Monday morning to see it first hand as they toured the floor of the 2016 North American International Auto Show during press preview days.

"It’s a very exciting thing to see the United States leading the world and the fact so much of it is in Michigan is fantastic.”

For the first time during his tenure, President Obama plans to tour the auto show on Jan. 20. The visit will come just days after his final State of the Union address where he is expected to again tout the successes of the American auto industry on his watch.

"I think he should come and do a well-deserved victory lap  for standing with us a time when there were a lot of people in D.C. who said to me ‘why does it matter where cars are made,' of course, we know why it matters," Stabenow said.

“Without President Obama we certainly wouldn’t be celebrating the most vehicles sold in the U.S. ever as of 2015."

"It feels very ‘up’ and innovative as we’re seeing with record car sales this year," he told FOX 17.

Huizenga opposed the bailout during his run for Congress, but said now its important to focus on moving forward, while applying good practice and policy to ensure the industry doesn't reach a similar cliff again.

“The auto industry is not just a southeast Michigan industry, it’s something that affects all of us in Michigan and really has a global impact," he said. "You look at the quality of suppliers we have in West Michigan, it’s countless and folks here in southeastern Michigan will tell you, if they didn’t have West Michigan suppliers, they wouldn’t have the industry they have.”

Gov. Rick Snyder is expected to tour the show on Tuesday, as he's done in the past.