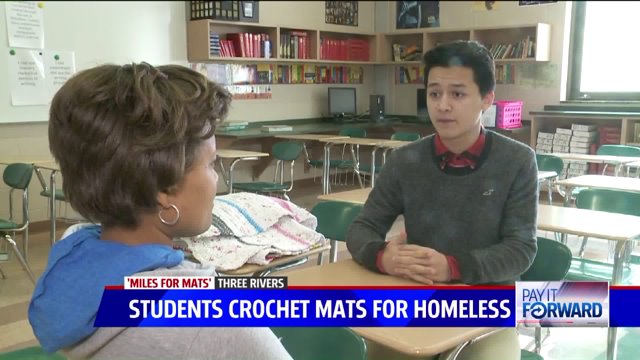 THREE RIVERS, Mich. — Great news West Michigan: those excess grocery bags lying around the house don’t have to be thrown out anymore. The National Honor Society students at Three Rivers High School are paying it forward by using them to crochet sleeping mats for homeless men and women to make winter a little more bearable.

“As soon as we were inducted it was kind of like ‘Here, this was the project we’re doing,'” said junior Michael Hayes. “And we’re just going to start knitting and creating these mats that are super cool.”

The project is called Miles for Mats and the goal is to create enough mats that they measure to be a mile long. The students are taking old grocery bags and cutting them into long strips called “plarn” which literally means plastic and yarn. They then crochet them into 6-foot by 4-foot sleeping mats for the homeless.

"Its [means] quite a bit to be able to give back to the community, especially the homeless who, no one really realizes how many homeless people are here in Michigan," said Hayes.

According to Michigan's Campaign To End Homelessness, which was created by the governor in 2006 in an effort to end the epidemic, there's over 86,000 homeless persons in the state.

Hayes said whenever someone hears about their project their ears perk up. The NHS is asking people for pledges of $200 per mat but they’ll take any amount. The students began the project when they returned from winter break  about a week ago and have only completed two mats so far. However, they have rallied the help of  their parents, neighbors and others to help out.

“Its not an individual sport,” said Ashley Eby, the NHS advisor. “We’ve got a lot of people involved. And really that's what NHS is all about: is getting our community involved and being able to serve and help altogether.”

Eby said that by the end of the project they’re expected to make 880 mats and raise $176,000. That money will be put back into NHS and the Three Rivers community.

“I am so proud of our kids that they’ve jumped in.” said Eby. “They are just very passionate about it and I know that they want to make a difference. I know that as juniors and seniors in high school that attitude will stick with them forever.”

Eby adds that not only do the homeless benefit but the students, like all participants, learn that giving is better than receiving.

“The students want to infiltrate the community with our positive service-minded ideas and help them to know that whats happening here in Three Rivers, we can impact such a great amount of people here at home,” said Eby. “Know that their service-minded hearts can then grow and kind of pay it forward.”