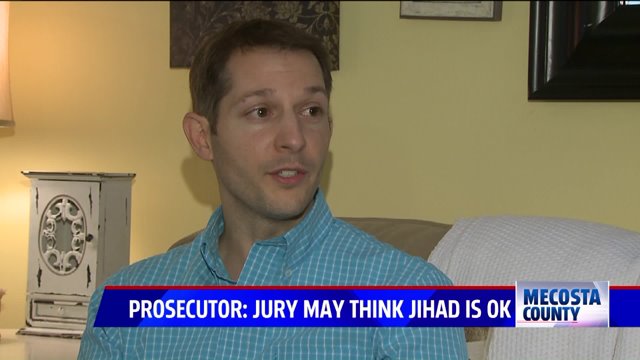 BIG RAPIDS, Mich. – The Mecosta County District courtroom was packed Thursday morning with supporters of Keith Wood at the preliminary hearing for the former pastor, now small business owner, who faces a five-year felony for passing out fliers on juror rights on a sidewalk in front of the courthouse.

After Judge Kimberly Booher adjourned the preliminary exam Thursday, both parties argued who should be called as witnesses in the case. Mecosta County Prosecutor Brian Thiede told Judge Booher he’s not a necessary witness, and if he is called as one he plans to tell the jury the pamphlets Wood passed out could create a “lawless nation.”

“This (Fully Informed Jury Association pamphlet) just says ignore the law, ignore the facts, do what your conscience wants,” said Thiede after he tossed the pamphlet on the table, "and I’m thinking, Oh my goodness, well, we could have the jury who thinks that jihad is righteous, and if the San Bernadino shooters had not been killed, they’ll say, Let’s acquit."

This statement was greeted by booing from the courtroom gallery, and Judge Booher asked people to not comment as Thiede then said, “We would have a lawless nation if people were to vote their conscience.”

“I understand what (Thiede is) saying: we don’t want anarchy and that sort of thing," said Kallman. "But I think he’s conflating what was going on here with what the actual rights of jurors are. Jurors have the power to rule according to their conscience.”

People in the courtroom applauded Kallman when he quoted from the Michigan Criminal Jury Instructions: “Quote, ‘In the end, your vote must be your own, and you must vote honestly and in good conscience.’ It’s in the jury instruction for goodness sake, that’s given every single time in every single criminal case in this state."

Kallman said the prosecution must be called as witnesses because the police reports show Thiede directed court employees to speak with Wood outside the courthouse as he handed out fliers Nov. 24. “These are all points that make it clear that they are necessary witnesses, but Mr. Thiede directly questioned our client in the hallway. When he is brought in, he’s not Mirandized. I don’t know what he asked him. I’m not entitled to call him as a witness, while this is all going on before the judge orders him (Wood) to be arrested?”

Theide argued Wood only passed out fliers because he knew of another case taking place that day. Court records for November 24 show Andy Yoder, an Amish man, pleaded guilty to three misdemeanors regarding Department of Environmental Quality permits to create and refill inland lakes.

“The defendant here had a specific interest in this case,” said Thiede. "We show that by he’s there at the pre-trial for this case when only this case was up for pre-trial. Then we see him at the courthouse again for this case that is talking about the Yoder case."

But Kallman said Wood was not targeting jurors when passing out pamphlets that have general legal information. He said these charges violate free speech.

“Our defense is a First Amendment defense: our client had the right of free speech to hand out this pamphlet with legal information,” said Kallman. “There’s nothing in this juror pamphlet that says anything about any case going on before the court. It’s general information put out by an organization that it was not even put out by my client.”

As Wood told FOX 17 before, he said he was not targeting jurors and wants his charges dropped.

Judge Booher plans to issue her written opinion on each person subpoenaed, though the defense and prosecution did not object to Judge Jaklevic and Magistrate Lyons testifying in this case.

Kallman told FOX 17 he plans to file another motion by Dec. 21 asking for Wood’s felony charge to be dismissed on grounds that it is a general charge that does not apply after already being charged with a specific crime noted in the misdemeanor for jury tampering.  The prosecution has until Jan. 8 to respond.