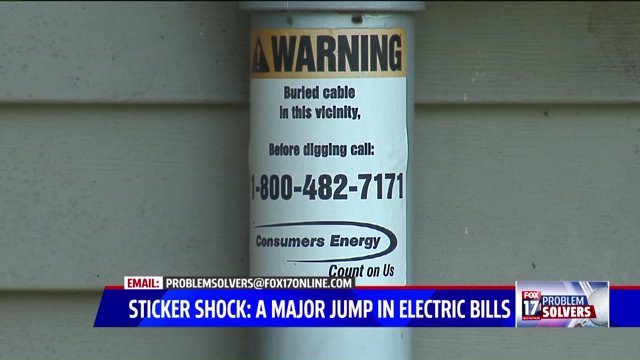 VAN BUREN COUNTY, Mich. -- Several Consumers Energy customers in a rural area of Van Buren County are outraged after getting bills that they say are more than 13 times the normal charge.

McCaid is only one of the three customers in her neighborhood that got bills that skyrocketed for the month of August.

Berry got an electric bill for nearly $500 this month, and her neighbor Jeff Boone, who lives alone, got one for more than $3,000, and her other neighbor, Christina McCaid, got hit with a nearly $5000 bill.

The neighbors say they can’t afford the high bills, and they wanted answers, so they called the Fox 17 Problem Solvers.

“I work full time right now, so, I guess I have to get a part-time job," said Dana Berry. "How else are we going to pay for them?”

Berry has lived in her home for 28 years, McCaid for five years, and Boone for 12 years, and they all say their bills are way too high. Consumers Energy believes the bills are not a mistake but a game of catch-up.

“During some periods of time, especially in rural areas where roads are bad and visibility is awful during winter months, we estimate our meter reads on previous years' use of our customers,” said Consumers spokesperson Dennis McKee. "Sometimes, if there are dogs in the yard, we may estimate meter reads too."

In other words, if Consumers Energy underestimates a customer's usage use in the past and didn't make it to their house to get the actual reading, they estimate usage. Then at a later date when they get the actual usage, they tack the charges onto the bill.

McCaid, Berry, and Boone aren’t satisfied with that answer.

Last August, McCaid’s bill was almost $300, but this year it's nearly $5000. Consumers told her on the phone that it was because she hadn't had an actual reading in omewhere between 14 and 24 months,mnMcCaid said.

“I mean, all of them estimated? All of them? All three of us? I just don't believe it. I don't,” said Berry.

McKee said the utility is working hard to resolve these kinds of issues for good. They’ve already replaced 610,000 old meters with smart meters. “In the area of Van Buren County, we have upgraded our meters to communicating meters, so we are already getting those daily reads from meters. This will help us get away from estimated meter reads,” said McKee.

“What really irritates me is that Consumers Energy can't come out and read my damn meter, but you can get out of the car and change the damn meter. You know what I’m saying? It really burns me to no end,” said Berry to McKee.

McKee said Consumers Energy is looking into why the bills are so high. Meanwhile, they're offering a payment plan to the neighbors and.

Consumers hopes to have all its in Michigan meters changed to smart meters by 2017. The smart meter actually sends usage like a text message to the utility daily, so they constantly know how much energy their customers are using.