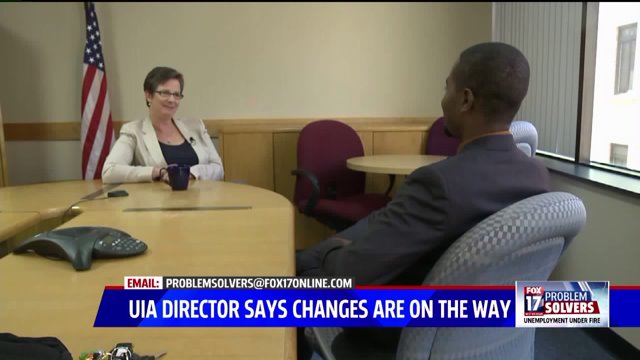 LANSING, Mich. -- A major development was announced on Thursday in an ongoing FOX 17 Problem Solver investigation. People across the state have reached out to FOX 17 and claim they have been blindly accused of fraud and wrongly fined by the Michigan Unemployment Insurance Agency.

Stephanie Comai is the director of the Talent Investment Agency which oversees the Michigan Unemployment Insurance Agency. She told FOX 17 that significant changes are on the way.

After months of reaching out to the state agency for comment and interviews, the FOX 17 Problem Solvers received a call from the agency requesting a sit down interview.

Comai said, “So we started actually this week with an enhancement to how we’re handling fraud cases."

She explained, "What we’re going to do in the future from this day forward is before any fraud determinations are issued, a staff person from the unemployment insurance agency is gonna take a look at the facts of the case, see what additional information we might need before we can make that determination.”

Comai said the computer system will still flag for discrepancies. However, a real person will then look at the discrepancies to determine if there's fraud.

In July, the Problem Solvers reported that there's a backlog of 23,000 unemployment hearings. Today, Comai talked about wanting to take the burden off of administrative law judges.

"We’ve asked for a number of the cases back, about 8,500 cases," she said her staff will review the cases. This will be done by the middle of next month, she said.

Comai said the agency is also piloting a new program called "Customer Service Days". The first event will be held in Detroit in September.

These major moves don't slow down the Problem Solvers investigation. There are still many issues we will continue to look into with the agency, including tax and wage garnishment taking place before someone has a hearing.

Conversations with state lawmakers will also continue with regard to improving the unemployment system.