The magic capital of the world can be found in Colon 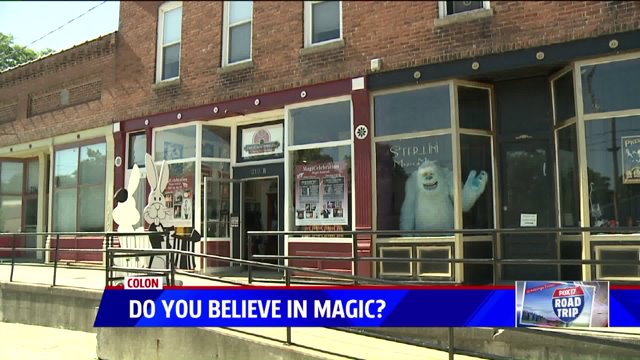 COLON, Mich. -- To start, let me say the small village of Colon (pronounced Coe-lynn) is located in our southern viewing area in St. Joseph County. It has about 1200 residents and became a village in 1904. It's known, at least locally, as the magic capital of the world. The phrase was coined by a magician in the 1930s by the name of Lester Lake that would do crazy fire stunts in the middle of the street.

Prior to coining that phrase, it was magician Monk Watson who grew up in Colon and became a major Vaudeville act...and quite successful. He preceded more well known famous magicians like Harry Blackstone Senior, Percy Abbott, and Harry Blackstone Junior. It was probably the Great Blackstone himself that truly put Colon on the map in the 1920s and 30s. Blackstone purchased about two hundred acres in Colon in 1926 after his wife visited the area and fell in love with it. The village was centrally located about halfway between Detroit and Chicago and was a perfect place to practice his magic act. In 1934 Blackstone, whose real name was Harry Bouton, made the Hill Opera House his headquarters in downtown Colon for years. He would practice there and enjoy the surrounding beauty of the area especially in the summer months. The land he purchased is actually known as Blackstone Island.

An Australian magician by the name of Percy Abbott partnered up with Blackstone for a short time and started a magic supply company...still there today known as Abbott's Magic. In less than two years, the two would have a major falling out and split. Blackstone moved away to a bigger city and continued to carry his show on the road, while Abbott stayed behind and ran the Abbott Magic Company. Today, there are three magic supply companies located in Colon.

There are several celebrities and magicians that are actually buried in the local Colon cemetery, not the least of which is Harry Blackstone Sr. and Jr.. The cremated remains of Percy Abbott are also in Colon, plus similar to the famous Hollywood walk of fame with stars cemented in concrete, Colon also has their magical walk of fame with almost three dozen stars engraved and encased in the concrete. Joe Ganger is the local town historian and operates tours around the village. He bears a striking resemblance to Harry Blackstone himself, and has seen Harry Blackstone Jr. perform on several occasions. For the record, Blackstone Sr. died in 1965, while Blackstone Jr. passed in 1997.

To this day there are magic festivals and gatherings in Colon each and every year. Magicians from all over attend the events, usually held in both July and August and sponsored by Abbott's Magic and a company called Fab Magic. Both of these companies perform a mini show on the weekend, usually Saturday, for patrons that care to visit and be amazed with tricks and illusions. Both stores are a virtual supply house of props and equipment for magicians all over the world. Need a set of trick cards or disappearing whatever, you can find them here. Contact Fab Magic here. Contact Abbott's Magic here. Click here for Sterlini Magic Company. Want more historical information on Colon? Click here.