What is prevailing wage and does it affect your tax dollars? 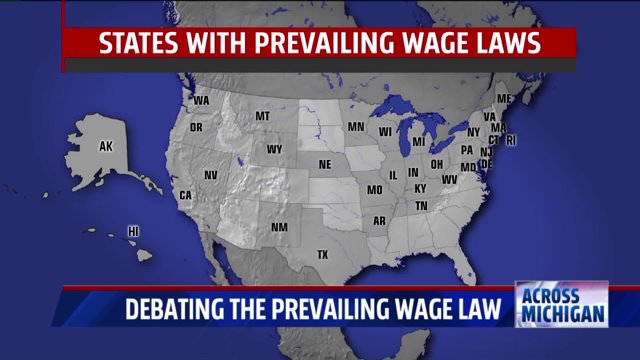 LANSING, Mich. -- It's likely that you have never heard the prevailing wage law discussed. But  you could soon have the chance to decide whether or not 50-year-old law remains on the books.

An advocate group is working to get the issue on the ballot to repeal the prevailing wage law.

The Board of State Canvassers this week approved a petition submitted by the group called Protecting Michigan Taxpayers to begin collecting signatures during the summer.

Michigan's prevailing wage law requires contractors to provide workers with union-scale wages and benefits whenever they're hired to work on construction projects funded by the state, such as roads or public schools.

Supporters of the law argue it provides a guarantee of fair pay for quality work, but detractors say the only thing it has done is inflate the costs of projects paid for out of taxpayer pockets, which is why it should be repealed.

“The more people learn about prevailing wage, the more they dislike it," said Chris Fisher, president of Associated Builders and Contractors of Michigan.

"Every year, taxpayers are paying hundreds of millions of dollars on government construction compared to what these costs are in the private sector,” said Fisher, who cited a recent study by the non-partisan Anderson Economic Group which found prevailing wage cost Michigan schools roughly $224 million annually.

"(Repeal) gives Michigan and taxpayers at least the opportunity to benefit from the best practices seen elsewhere," he said.

Currently, 32 states in the U.S. mandate some sort of prevailing wage for state funded projects, all with varying thresholds for coverage.

Patrick 'Shorty' Gleason, legislative director with the Michigan Building and Construction Trades Council argues the idea behind prevailing wage is simple and necessary. He said the mandate provides a sort of wage floor, and without it contractors would simply try to make lower and lower bids. The lower bids would bring down labor costs and ultimately hurt quality effecting people well beyond the construction industry, Gleason said.

“There’s no question about it, any time you take more away from working class people it affects other people as well," he told FOX 17 by phone Wednesday.

Gleason said prevailing wage shouldn't be viewed as a union vs. non-union issue He argued the fight to prevent the repeal of prevailing wage is about keeping the state's economic turnaround moving forward.

“It’s absolutely ludicrous," he said. "When you stop and think, we’re trying to make the economic turn here in the state of Michigan, and they’re talking about cutting wages instead of coming up with a road plan?”

If the petition receives enough signatures—roughly 250,000—within a 180-day window, it moves to the Republican-controlled legislature, where lawmakers can choose to take a vote. If no vote is taken, the issue moves to a ballot initiative to be decided by voters.