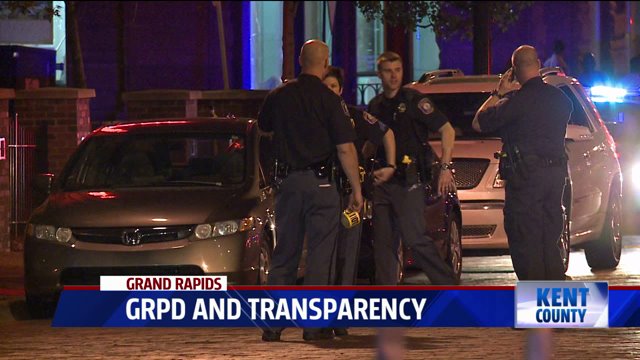 GRAND RAPIDS, Mich. -- In an effort to be more transparent in what Grand Rapids Police Chief David Rahinsky refers to as a post-Ferguson world, the department is making personnel changes to improve communication with the community.

The effort follows months of changes that have been happening within the department after concerns were raised by citizens and several community activist groups in recent months in response to the unrest in Ferguson, Missouri.

Among the changes are managerial shifts, including adding a detective to the Grand Rapids' Major Cases Team to assist in solving the city's three unsolved homicides since the start of the year.

"We’re working diligently day and night to try to find the individuals responsible for these three acts and when we do we’ll make sure they are prosecuted to the fullest extent of the law.”

GRPD also announced several promotions last month to continue Rahinksy's commitment to the the department’s continued effort to be more diverse and representative of the community.

“I think traditionally the PIO capacity had been underutilized in a lot of places," he said.

"Now that we’re moving in the direction of body cameras, now that we’ve heard the community speak with a unified voice post-Ferguson about wanting to see greater transparency... I think it’s a great move for the department and great for the city."

Dixon's prior assignment with the department for the past eight years involved working with the Michigan Department of Corrections as a liaison officer with state parolees for the prisoner re-entry program.

“Organizationally, this is a renewed commitment to the people of Grand Rapids," Dixon said. "Our goal here is to provide more timely information to the citizens."

Prior to joining the department, Dixon worked at a local Grand Rapids television station as a news photographer. He said it was a natural transition for him to make, adding his background serving with the U.S. Navy also helped.

“I always wanted to do more and when I was working in my former capacity in media I felt like I wasn’t doing enough, so now with the opportunity to work directly with the citizens of Grand Rapids."

"I feel like I’m finally able to look myself in the mirror and say I’m doing what I’m supposed to do.”