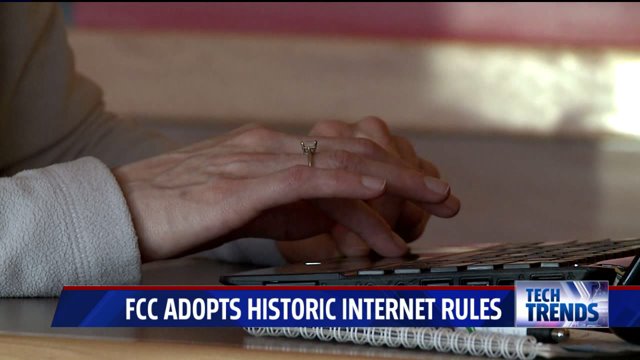 The FCC passed new regulations on Thursday regarding net neutrality.

It has been controversial for years, and after several hearings the commission voted in favor of passing new rules that prohibit internet providers from slowing down streaming speeds for some customers or otherwise limiting access.

The new regulations also make it illegal for services like Netflix, to pay an internet provider to make their movies stream faster.

"Everybody wants to make sure that the consumer has as much access to internet content as possible. Where the controversy comes in, it's really a philosophical difference on how best to do that," said David Tarrien, WMU Cooley Law School.

The Federal Communications Commission setting regulations on communication services like the internet is nothing new, dating all the way back to the commission`s inception in the 1930`s. At that time, the FCC was used to regulate telegrams.

As the use of the internet becomes more than just a service and seen more as an information gathering necessity, according to WMU Cooley Law School Assistant Professor David Tarrien, government intervention was inevitable.

"The internet provider cannot artificially slow down the stream. They can't slow down the service or stop service all together based on their choice," said Tarrien.

So what does this all mean? According Tarrien, you might of had your internet speed slowed down without your knowledge while trying to stream a video on a service like Netflix, causing the video to freeze or move out of synch with the audio. On the flip side, another streaming service like Hulu, might have paid money to an internet provider to speed up their stream, causing more consumers to use their servce instead of another.

"The internet providers themselves say that well that we don't do that, and for the most part, we probably won't because we want to be responsive to the consumer," said Tarrien.

Thousands of people filed complaints with the FCC, saying this happened to them.

"It makes it so that a popular site like Netflix, which can take up to 30% of your bandwidth at any given time, you will not be charged more to access it," said Tarrien.

Tarrien said that other start up companies who don`t have the funds to pay internet providers to speed up their websites are at an unfair disadvantage.

Tarrien also said that the argument on whether to let the internet be run by private enterprise versus being regulated by the government has been on ongoing issue, opening up a new door of expected lawsuits against the government.

"It also reached some privacy issues because if the internet service provider can slow down streams and knows what you were trying to access, they can also look at other things," said Tarrien.

Many internet providers deny accepting money from companies to speed up their websites. Those same internet companies also argue that Thursday's approved regulations will end up costing more for the consumer, but the FCC said that the new regulations will help better protect consumers from rising prices.