“The Interview” hits the big screen in Kalamazoo 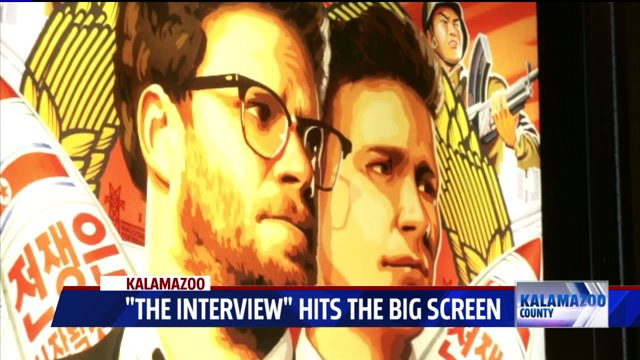 KALAMAZOO, Mich. -- Moviegoers have ignored threats from Sony hackers and negative reviews from movie critics and made their way to see the film, "The Interview" anyways -- Especially at The Alamo Theatre in Kalamazoo where all the showings were sold out on Friday.

Whether you thought the movie was good or bad, there's no doubt the hype behind the incredibly challenging circumstances to release the film is what brought people to the theatres. The movie made $1 million at the box office on Christmas Day and people can go on YouTube, Xbox video or Google Play to view it in the comfort of their own homes. The Alamo in Kalamazoo says its a strategic move for them to show it since ti's the only theatre in West Michigan doing so. People say the reason they show up, however, isn't necessarily to make a political statement.

"I don't think it's necessarily everyone's patriotic duty to go see it," said Alex Voorman. "But I think you shouldn't be frightened to release a movie just because you know a country 6,000 miles away, that I wasn't aware had internet, threatened us over it."

Starting Saturday, there will be four showings of the film instead of three and the theatre is unsure how long it'll be playing there. The Alamo says this is the only theatre in West Michigan showing the movie. The next closest showings are in Ann Arbor and Detroit.