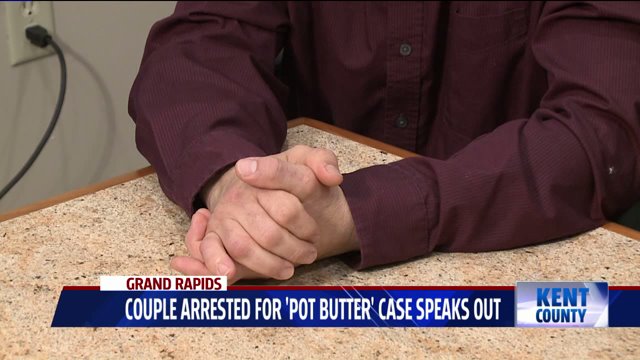 For the first time since their arrests, the husband and wife at the center of a medical marijuana case involving "pot butter" and Kent County Sheriff`s Deputies are speaking about their experience.

GRAND RAPIDS, Mich. - For the first time since their arrests, the husband and wife at the center of a medical marijuana case involving “pot butter” and Kent County Sheriff’s Deputies are speaking about their experience.

Just after 10 o’clock, on the night of March 17, 2014, officers from the Kent Area Narcotics Enforcement Team served a search warrant at the home of Timothy and Alyssa Scherzer.

While collecting evidence, investigators determined four of the patients under the Scherzer’s care either worked for or had ties to the Kent County Jail.

The Scherzers sat down with FOX 17 to discuss their medical marijuana operation and the punishment they’ve received since pleading guilty to drug-related charges.

“It was more or less just for my family, my cousin, for her relief of her Crohn’s disease,” Scherzer said. “Then, with my brother-in-law Tim, with the number of back surgeries and neck surgeries he’s had with fusions and stuff , for an alternative way for him to try to get some pain relief.”

“I did get relief with the edibles and I thought it would be worthwhile to pass that on to other people,” said Scherzer.

It was that thought that led Scherzer and his wife to become caregivers.

All of that changed back in March when the U.S. Postal Service inspected a package Scherzer tried to send to his cousin who is disabled and does

Inside the package was more than two ounces of marijuana. Despite the discovery of drugs, the Postal Service passed on prosecution and instead sent the tip to Kent County. In a matter of hours, a search warrant was granted by a judge and officers showed up at Scherzer’s door.

“We made their search very easy for them because we fully cooperated and we told them we were under the full understanding that we were legal,” said Scherzer. “So, it was more of trying to present our legality to them - why we had plants.”

During the search, Scherzer told the officers he also made marijuana butter that he provides to his patients. Marijuana butter, along with other “edibles,” as they’re called, are illegal under current Michigan law.

Alyssa Scherzer was the caregiver for a fourth officer, Tim Bernhardt, her brother-in-law.

Bernhardt, according to court documents, acted as something of a middleman, getting the marijuana butter from Scherzer and providing it to Frederick, VanDoorne and Brian Tennant.

“That aspect is supposed to be a direct caregiver-to-patient transaction,” explained Scherzer. “That wasn’t followed correctly.”

Looking back, it’s something Scherzer regrets.

After pleading guilty in October, Bernhardt took his own life and was laid to rest last week. He was to be sentenced in December.

Brian Tennant pleaded guilty to a reduced charge, as well, and is awaiting sentencing next month.

The cases for Frederick and VanDoorne are still winding their ways through the legal system.