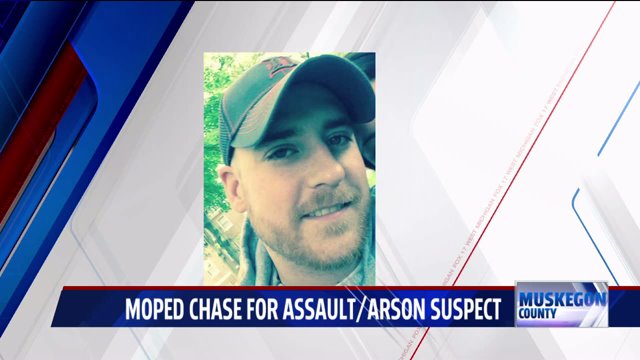 MUSKEGON COUNTY, Mich. -- A Norton Shores man was arrested Sunday after leading police on a chase on his moped.

Norton Shores Police were dispatched to a home on Reneer Avenue west of Leon Street after Richard Shear, 28, allegedly threatened his mother and girlfriend with a sledgehammer and a knife and tried to set the house on fire.

Sources tell FOX 17 that the suspect’s mother called police after he threatened her with the weapons.

He`s accused of threatening his girlfriend too, but she told FOX 17 that never happened.

Sources also tell FOX 17 Shears attempted to light the house on fire by pouring gasoline on his landscaping then throwing a candle.

They say he also slashed an SUV’s tire before hopping on the moped and fleeing.

As FOX 17 took a closer look at the incident, we learned Shear has a history of drunk driving arrests, but we’re told he is also seeking help for mental health issues.

We’re told Shear, just like many other servicemen and women, suffers from Post Traumatic Stress Disorder (PTSD), a result of his time spent serving overseas in Iraq during his eight years in the Marines.

Those close to him tell us he has been struggling with PTSD, abusing alcohol to prevent dealing with the deep seeded issues and hitting rock bottom on Sunday.

Police say the chase ended back at Shear’s home when he tried running back inside but was arrested by police.

A video of part of the chase was posted on YouTube. (**Video contains some explicit language**)