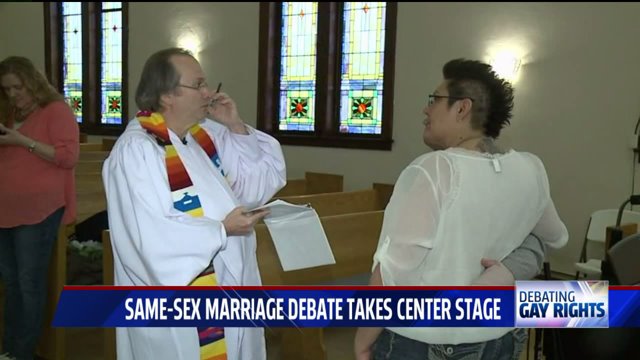 CINCINNATI, Ohio - Supporters and opponents of gay marriage gathered outside the Potter Stewart United States Courthouse over two days ahead of hearings for six gay marriage cases from four states.

Among them, April DeBoer v. Gov. Rick Snyder, which is a case challenging the constitutionality of Michigan’s ban on same-sex marriage.

“We’re educating people that wouldn’t otherwise be exposed to gays and lesbians,” said April DeBoer. “The amazing stuff even we have been teaching our coworkers about what we face and what our children face and the lack of protection our children face because we’re a gay couple.”

DeBoer and her partner Jane Rowse sued the state because they cannot jointly adopt their three kids.

The state argued that voters should decide whether Michigan’s same-sex marriage ban should be overturned, just as voters decided in 2004 to constitutionally ban gay marriage. Aaron Lindstrom, from the Office of the Michigan Attorney General, also said it was too soon to judge the outcomes of children raised by same-sex couples.

Those claims were challenged by Judge Daughtrey. She repeatedly asked whether the democratic process was in fact available to the lesbian, gay, bisexual and transgender community. Daughtery also questioned the state’s use of University of Texas sociologist Mark Regnerus, adding the UT website even comes with a disclaimer about his research saying, “don’t believe what he says.”

Carole Stanyar, who argued on behalf of DeBoer and Rowse says it’s now time for the court to decide because the ‘wait and see’ approach suggested by the State of Michigan isn’t a reasonable rationale.

“I think it was a lively argument,” said Stanyar. “Oral arguments are often like this: part speech, part conversation and part root canal and this was no different.”

While a massive rally was held Tuesday night, the party didn’t stop on Wednesday as hundreds of same-sex marriage supporters gathered outside the courthouse.

Just as the proceedings were set to begin, another large gathering was held.

It was attended by gay rights supporters from across the Midwest: Michigan, Ohio, Kentucky and Tennessee, just as cases from each state were being heard in front of a three-judge panel from the U.S. Sixth Circuit Court  of Appeals.

“When you look at gay couples, they’ve been together so long, they’ve done everything they can to fight for it, but it’s getting to that point where we can finally get it,” said 20-year-old Adam Hoover. “Every day that we don’t have it, another gay couple is dying and they’re not gonna ever get that.”

Hoover is a grassroots organizer and founded Marriage Equality Ohio at age 14.

Even though the mood was lively outside, it seemed everyone’s thoughts were focused on what was going on behind the closed courtroom doors.

“It’s very difficult,” said Betsy McKeeman. “We’ve been very fortunate because all of the doctors and hospitals have been very open to our family but if anything were to happen to my wife, I would have no legal decision-making in their well-being. In the eyes of the law I’m treated as a roommate, or an aunt, and that’s horrible because they call me mom.”

Julie and Betsy McKeeman were married in San Francisco, but call Warren, Mich. their home.

“It’s important for us to be here to set an example for our kids to show them how important it is to our family and other families like ours,” said McKeeman.

But Phil Burress, President of Citizens for Community Values, believes in marriage as it’s depicted in scripture.

“Marriage is the oldest institution on earth and it’s rooted in scriptures where marriage came from,” Burress explained. “There’s no question that most people who are Bible believers and understand scripture tha

t marriage is between one man and one woman.”

In addition to speaking against same-sex marriage, Burress also encourages people to leave behind that ‘lifestyle.’

“If people want to engage in homosexual behavior, that’s their right,” Burress said. “But we know that there’s lots of people that do not want to have the temptation of same-sex attraction and there’s a way out.”

But for those like DeBoer and Rowse, what they have is not a lifestyle. This is their life: a life together that they hope will one day be legally recognized.

“We can’t make any predictions,” DeBoer said. “We’re just gonna wait and see. We hope. That’s all we have right now is hope that we will be recognized as a family, a legal family.”

The court did not rule on the case and regardless of the outcome, an appeal will likely follow. That could come in the form of a request for an en banc hearing, which would include every member of the Sixth Circuit Court. Depending on whether the court takes the appeal would impact a potential appeal to the United States Supreme Court.