Host of 2,000+ person party: ‘Worth it’ despite drug overdoses 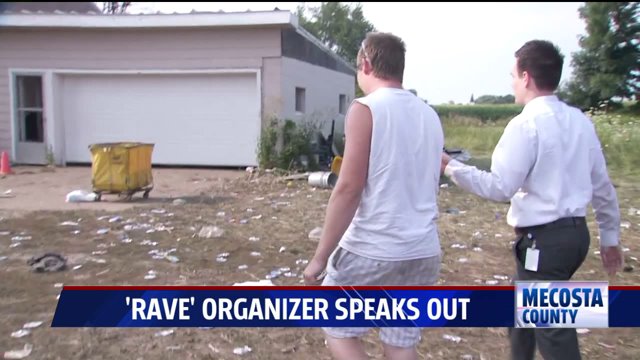 HINTON TOWNSHIP, Mich. -- It was a lot quieter Sunday night outside James Taylor's Mecosta County home than it was just hours before.

Taylor, 20, calls the  farm house that's been in the family for 100 years his party house.

Taylor said Saturday night started out as a planned birthday party for a friend, but it quickly grew to more than 2,000 people. He also said that it was a goodbye party for him before he moves to California next week.

"People could have been laying out in my yard dead this morning," said Taylor. "I'm glad the police were here and the ambulances."

Taylor said it was a party for the record books. He captured images while standing on the roof of his home while a massive crowd cheered him on. With two DJ’s, a fire thrower, go-go dancers and strippers, Taylor believes he successfully threw the largest party ever to hit West Michigan.

As for reports of overdoses, "I didn't force anything down anyone's throat," Taylor said. "I didn't make anyone stay here until 7 a.m. or 11 a.m. or whenever it is that everyone finally left. I didn't make this kid pass out on my floor. People wanted to be here. That was their decision."

Taylor said that his home got so crowded that people couldn’t move from one room to the other, and the floor boards were shaking from all the extra weight.

Taylor said that his address was given out at about 4 p.m. on Saturday, which was just enough time for a heads up to people who wanted to attend but not enough time for word to get out to police.

"I guess someone drove all day during the party day from Tampa all the way to here just to come to this party," said Taylor.

The Mecosta County Sheriff’s Office said that  at least 2,000 people, many of them under 21 years old, attended the party. They said there were at least six drug overdoses and the reported sexual assault of a 19-year-old Mount Pleasant woman.

"What do you say to anyone who says you are responsible?" asked FOX 17.

"I am. It's my house," answered Taylor. "You got to deal with it afterwards, but apparently it was worth it."

Taylor said that he was unaware anyone at the party was underage and said that their parents should be held accountable.

"Any time you point at someone, you got three fingers pointing back at you, and if you are a parent that's got a 14-year-old child that's been able to be at my house all night, and according to the police there was a lot of them here. So, I think some parents should do some reflections on their parenting before they start getting mad at me."

MORE DETAILS ABOUT THE RAVE HERE

Taylor said that he isn't ruling out another party.

"There's always a coming home party," said Taylor. "I feel like anybody that's got a real problem with me partying out here in the middle of nowhere is a spaz."

Taylor said that he offered let all 2,000 party goers stay the night at his place so no one drove intoxicated.

As for any possible charges, Taylor said that he’s expecting to be contacted by sheriff’s deputies in the next couple of days. He said that he will face the music and take responsibility for anything he’s done that was criminal.