MUSKEGON COUNTY, Mich. –  Norton Shores Police have identified the two women who they say were caught on camera shoplifting at an area Kohl’s store with their children by their sides.  FOX 17 News has also learned one of the mother’s was involved in an alcohol-related crash the same day she was charged with the crime.

The same day, at 10:37 p.m., Ottawa County Sheriff’s deputies said Trievel was behind the wheel when she crashed her Chrysler Pacifica at 148th Avenue and Laurie Lane in Spring Lake Township.  Trievel was the only person in the vehicle at the time of the crash.  She told investigators she had taken her eyes off the road to look at her cell phone.  She wasn’t wearing a seat belt because she said it was broken.  Alcohol was believed to be a factor, said the sheriff’s department.  Trievel was taken to Hackley Hospital in Muskegon.

Both suspects were identified just minutes after police sent surveillance photos to the media.  A news release from that day stated, “The Norton Shores Police Department is requesting assistance from the public to identify two females suspected of shoplifting from Kohl’s, 5695 Harvey St, on March 26, 2014. The suspects are believed to have stolen just under $1000 worth of merchandise.”

“Much of the stolen property was recovered; however, there are several items not accounted for,” said Norton Shores Police Chief Daniel Shaw. 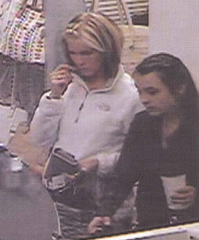