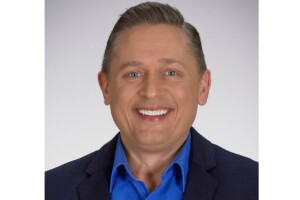 Todd Chance is the co-host of the FOX 17 Morning Mix which airs each weekday morning from 9-10 a.m. Todd is a transplant to Michigan and has lived “in the mitten” for the past 10 years. His former career as a radio broadcaster brought him to Grand Rapids and from there he worked for four years as an entertainment journalist for the Grand Rapids Press. He joined the cast of the Morning Mix in 2016.

Todd comes from a family that consists of three older sisters so it was a natural fit working with his partner LeighAnn Towne. (“She’s the sister I always had…but I’d never call her older.”) On the show, he’s the one that will try anything at least once and his sense of adventure has had him broadcasting from the top of the Mackinac Bridge, singing with a barbershop quartet, and strapping on Kangoo shoes to dance around the studio.

When he’s not broadcasting, Todd’s passions are being a family man to his wife and two daughters, Cubs baseball, Netflix binges, and his love for the culinary arts. He is also the founder and president of Daddy Daughter Time, a Michigan-based nonprofit organization dedicated to deepening the bond between fathers and daughters through monthly events, activities, and information.