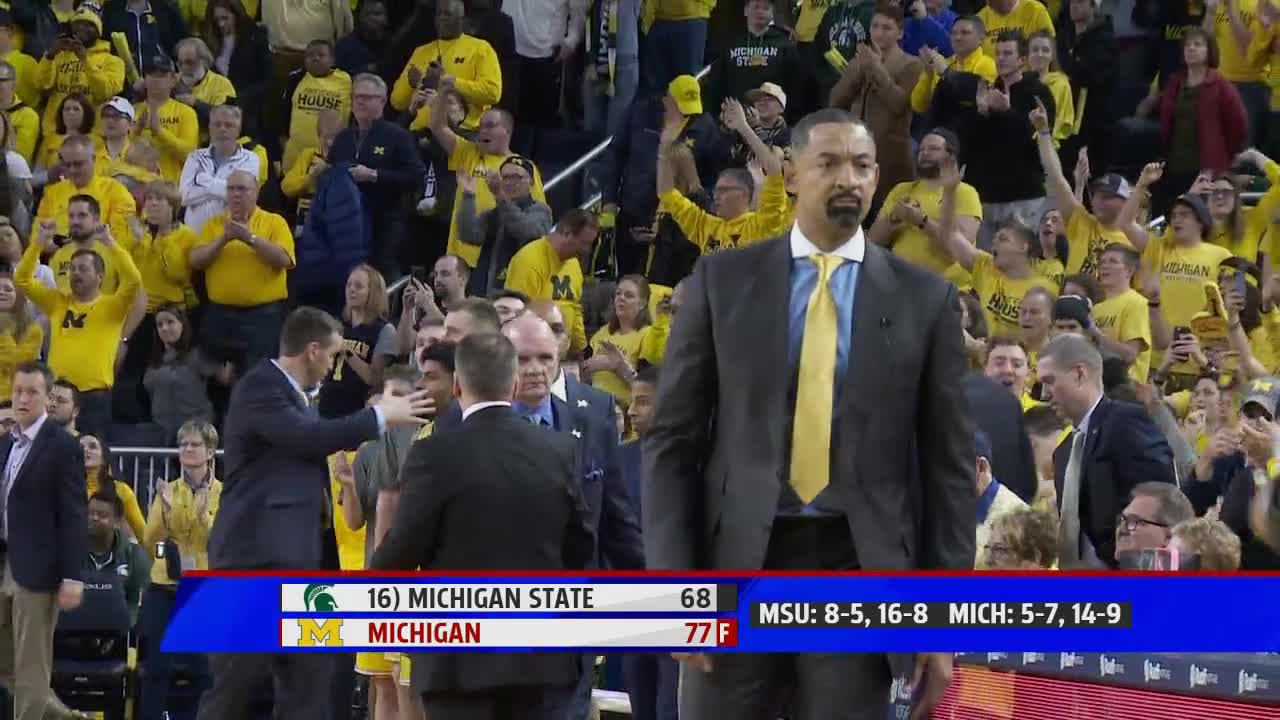 The Wolverines’ 3-point accuracy returned too.

Livers scored 14 points and Zavier Simpson added 16 to lift Michigan to a scrappy 77-68 victory over No. 16 Michigan State on Saturday. Livers injured his groin Dec. 21 and missed nine of the next 10 games, but he was in the starting lineup and helped the Wolverines salvage a split of the regular-season series against the Spartans. Michigan also snapped a three-game home losing streak.

“Me or not, this game was going to be a tone setter,” Livers said. “I think we all did a great job coming out focused and staying disciplined to what the coaches believe that we can do.”

Cassius Winston, who scored 32 points in Michigan State’s 87-69 win over the Wolverines last month, scored 20 in the rematch but shot just 5 of 18 from the field.

“I don’t think I got an easy shot,” Winston said. “They made me work for a lot of shots and to get space. They did a good job on the defensive end.”

The Spartans have lost three games in a row.

Michigan State only had one lead — 1-0 early in the game. Michigan led 29-23 at halftime, and although the Spartans pulled within one in the second half, they lost to the Wolverines for the first time in five meetings.

Jon Teske, who had not scored to that point, threw down a one-handed alley-oop dunk to put Michigan up 46-40.

“We’ve been in every game but one,” Michigan State coach Tom Izzo said. “And yet, we get close like that, cut big leads ... it’s almost like we go brain dead then, and that’s got to change.”

Both teams played hard from the beginning, but it didn’t make for aesthetically pleasing basketball at the outset. There weren’t many points or whistles in the early going.

The first media timeout didn’t come until there was 14:04 left in the half. The score was 3-3, and the teams were a combined 2 of 17 from the field with eight turnovers.

Simpson was available to the media for the first time since reports surfaced about a car crash he was in last month. MLive, citing a police report, reported Thursday that Simpson crashed a car registered to the wife of Michigan’s athletic director. Simpson told police the car belonged to Evan Manuel, a student manager for the basketball team and the son of Wolverines AD Warde Manuel.

Simpson was suspended one game. He received a citation for driving too fast for conditions.

“I made a mistake that I owned up to — apologized to my teammates, my family and friends, and also the fans,” he said. “I’m just glad at the end of the day I’m safe and no one else was involved or anything like that.”

Michigan State: The Spartans were unlucky to catch Michigan on one of the Wolverines’ best outside shooting days of late, but Michigan State’s struggles on the offensive end may be a bigger concern. The Spartans shot 33% from the floor.

Michigan: It was a crucial win for the Wolverines. They’ve been near the bottom of the league standings after an impressive nonconference start. With Livers back, they’ll hope for a strong finish.

That nation’s top-ranked team in the preseason, the Spartans will likely drop some more after a pair of losses this week.

Michigan: The Wolverines play at Northwestern on Wednesday night.