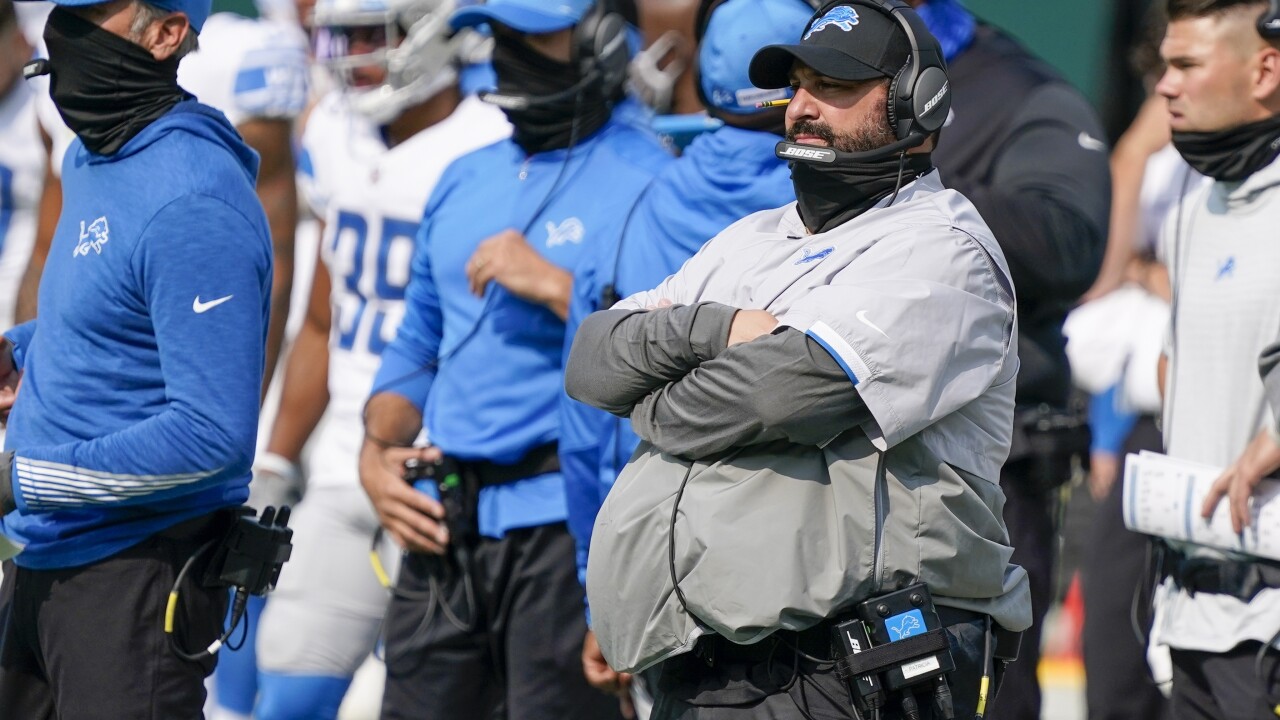 Some of Patricia’s players attempted to take some heat off him on Monday.

“I think it comes down to the players,” Lions center Frank Ragnow said.

Super Bowl-winning linebacker Reggie Ragland signed with the Lions in the offseason after liking what he saw on the roster.

“We can’t unravel when things are not going our way,” Ragland said. “We got all the daggum pieces.”

Ragland is more familiar with winning than losing after starting 32 of 43 games the previous three years with the Kansas City Chiefs.

Detroit has set a new standard at blowing leads, becoming the first team in league history to lose four straight after leading by double digits in each game.

The Lions have fallen apart early and late in each of their first two games. They led Green Bay by 11 points and lost 34-14 after opening the season with a 17-point, fourth-quarter lead only to lose 27-23 to Chicago.

Clearly, this is not the start Patricia desperately needed.

Patricia barely kept his job last season, which ended with a nine-game losing streak and finished with just three wins. He and general manager Bob Quinn, both of whom were hired away from the New England Patriots, were told by ownership that contending for the playoffs in 2020 was an expectation this season.

Detroit (0-2) would have to win about twice as much as it loses the rest of the season to put itself in postseason contention. And, that seems improbable.

The Lions play Sunday at Arizona (2-0) and dual-threat quarterback Kyler Murray is likely looking forward to facing a defense that is struggling to rush, tackle and cover.

Patricia is keeping the faith, publicly at least.

“I’ve got all the confidence in the world in these guys,” said Patricia, who is 9-24-1 in two-plus seasons.

The Lions let veteran Sam Martin leave in free agency and put the punting job up for grabs. Jack Fox, as an undrafted rookie in 2019, averaged 54.2 yards on five punts against the Packers. He has helped the Lions rank among league leaders in punting.

With just two sacks, Detroit’s pass rush is failing to get to quarterbacks and they’re picking apart the banged-up pass secondary. The Lions drafted Notre Dame standout Julian Okwara in the third round to bolster the pass rush, but he was a healthy scratch at Green Bay.

Tight end Jesse James does not have a catch, starting even slower than he did during his debut season with the team. James had just 16 catches in 16 games last season after signing a four-year deal as a free agent. He had 120 receptions for 1,189 yards and nine touchdowns in four seasons with Pittsburgh .

Receiver Kenny Golladay, who led the league in receiving touchdowns last year, has not played in 2020 because of a hamstring injury. HIs absence is hurting the team’s ability to stretch the field vertically.

“We’re close,” Patricia said when asked about getting Golladay on the field.

Sheila Ford Hamp’s next move, or lack of one, as a first-year team owner will be watched closely as she faces decisions about who she wants leading the franchise from the front office and on the field.