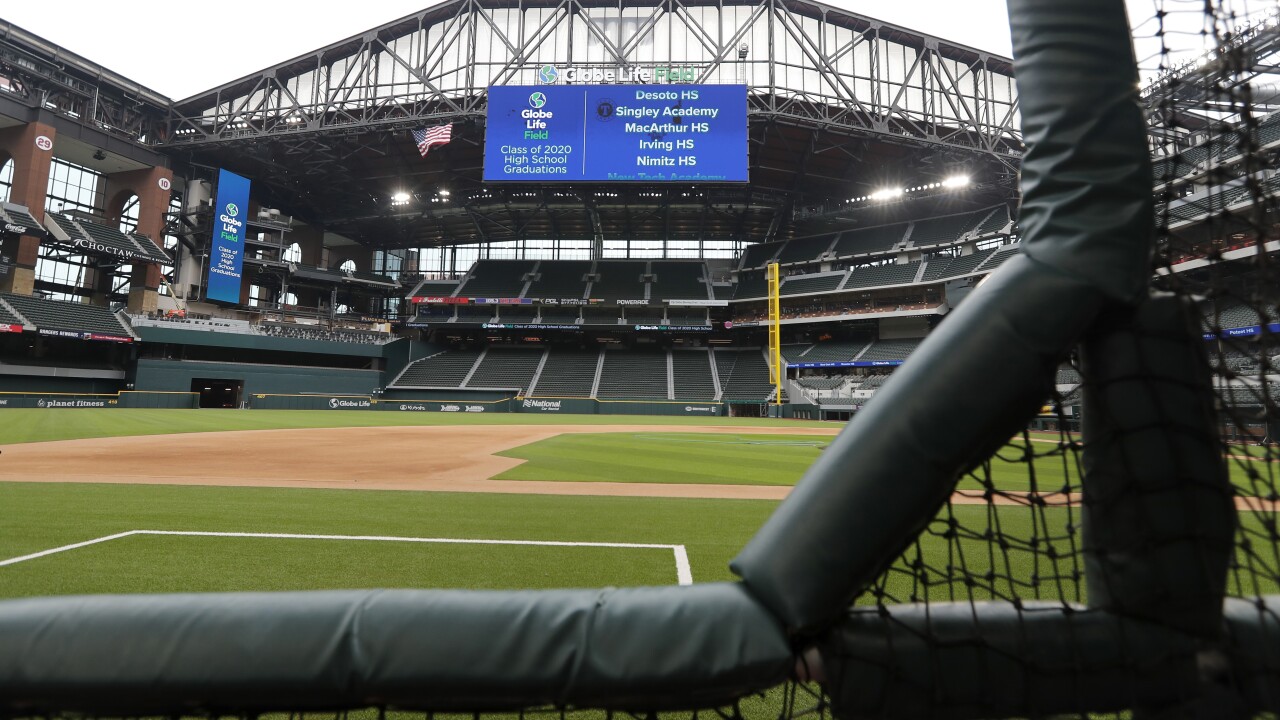 Copyright 2020 The Associated Press. All rights reserved.
Tony Gutierrez/AP
A view of the Globe Life Field, the newly-built home of the Texas Rangers, with the roof open from a perspective along the third base line is shown in Arlington, Texas, Wednesday, May 20, 2020. The large video screen at the top of the stadium shows upcoming high school graduation ceremonies for the class of 2020 to be held at the park. The Rangers were supposed to have its home opener on March 31, against the Los Angeles Angels, but have yet to see one game played in it this season amid the coronavirus pandemic. (AP Photo/Tony Gutierrez)

After weeks of wrangling, the MLB Players’ Association told MLB that players will be ready to report on July 1 for a second Spring Training.

Teams will conduct a 60-game season in home ballparks, MLB said on Tuesday. Most teams will conduct their preseason training in their home cities instead of utilizing Spring Training facilities.

The length of the season has been greatly reduced from 162 games after MLB suspended the season in March.

The regular season is expected to begin on July 23 or 24.

Teams will play the majority of their games versus in-division opponents, with the remaining games being played against interleague teams from the same geographic division.

"Major League Baseball is thrilled to announce that the 2020 season is on the horizon," MLB commissioner Rob Manfred said. "We have provided the Players Association with a schedule to play 60 games and are excited to provide our great fans with Baseball again soon.”

The two sides have struggled to reach an agreement in recent weeks as the two sides disagreed on the number of games to be played, and a salary structure. Players and owners previously agreed to a framework in March when the season was suspended stipulating players would get a full prorated salary if games would be held in front of fans.