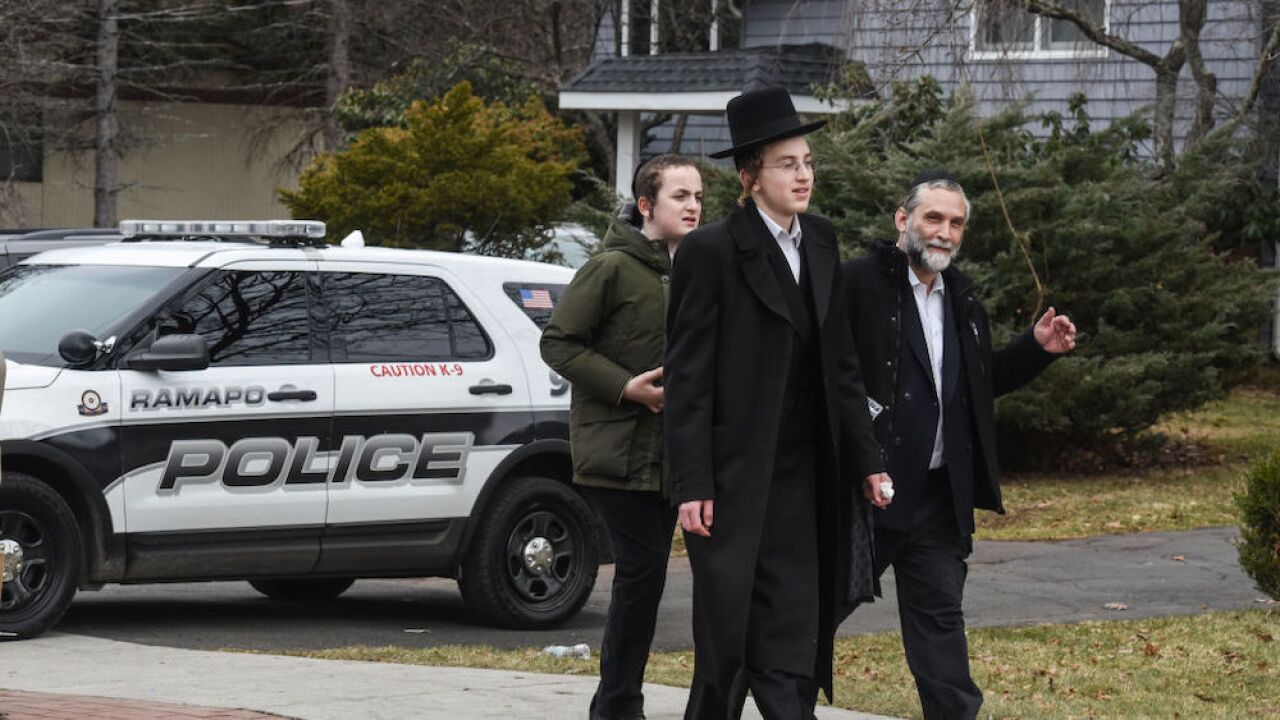 The moments after a man wounded five people with a machete at a Hanukkah celebration were "sheer terror" around the New York home where the attack occurred, Rabbi Yisroel Kahan told CNN.

After slashing his victims, the suspect tried to enter a nearby synagogue before community members shut the doors and kept him out, one witness said. Grafton Thomas was at large for about an hour before police arrested him in Harlem without a struggle.

"Thank God police were able to apprehend him ... and that's how we could put our kids to sleep. Kids were afraid to go to sleep," Kahan said.

Thomas, 37, faces federal hate crime charges in the stabbings, on top of the five counts of attempted murder he pleaded not guilty to earlier this week.

Thomas "has no known history of anti-Semitism and was raised in a home which embraced and respected all religions and races," his family said in a statement released by his attorney Michael H. Sussman.

He suffered from depression and psychosis for years, Sussman said, and was hospitalized several times in 2019.

"What rhetoric, what hateful anti-Semitic messages he saw that got him to do this God knows," Kahan said. "Justice should be served and he should get the help he needs."

"Excusing anti-Semitism only leads to worse cases," he added.

The five people injured inside the rabbi's home were all Hasidic Jews, the Orthodox Jewish Public Affairs Council for the Hudson Valley Region said. One of them was the rabbi's son, who is recovering.

In Thomas' home, about 40 minutes away from the site of the attack, investigators found a journal that referred to "Adolf Hitler" and "Nazi Culture" on the same page as drawings of a Star of David and a Swastika, according to the complaint.

One entry in the journal said "Hebrew Israelites" took from the "powerful ppl (ebinoid Israelites)" and questioned "why ppl mourned for anti-Semitism when there is Semitic genocide."

The criminal complaint said "ebinoid Israelites" appears to be a reference to the "Black Hebrew Israelite" movement.

Sussman said he had not seen those journal entries but had reviewed earlier writings by Thomas. Those writings reflect the "ramblings of a disturbed individual" but contain "no suggestion ... of an anti-Semitic motive, of any anti-Semitism," Sussman said.

The internet search history from a cell phone found in Thomas' car included searches such as "Why did Hitler hate the Jews" and "German Jewish Temples near me."

The searches also included the phrase "Prominent companies founded by Jews in America."

On Saturday -- the day of the attack -- the search history showed an article called "New York City Increases Police Presence in Jewish Neighborhoods After Possible Anti-Semitic Attacks. Here's What To Know."

'We have to stand strong in faith'

Saturday's stabbing was the latest in a long series of attacks against Jewish New Yorkers . Recent violence has prompted new hate crime education in some schools and heightened security in Jewish neighborhoods in Brooklyn and across the state.

Rockland County, where the stabbings took place, has the largest Jewish population per capita of any US county, according to the state of New York. Almost a third of its population is Jewish.

"Anti-Semitism has been going on in ... New York City for many, many years and it spilled over to Rockland County and to Monsey," Rabbi Shmuel Gancz, the Chabad Jewish Center of Suffern director, told CNN.

While many have grown fearful following the string of incidents, Gancz urged communities "not to be frightened."

"That's really one of the things that the anti-Semites, that the haters want us to do is to ...get down and be frightened to lock our doors," he said. "Obviously we put all security measures in strong place and we don't rely on prayer alone, we protect ourselves, we alert the security, we fight back if we need to at times."

But the most important act, he said, is "we have to stand strong in faith."

The armed security will include off-duty or retired law enforcement agents.

Brosnan Risk CEO Patrick Brosnan, who said he lives close to the area, said his company is "volunteering our services around the clock."

"We will keep adding as many measures as it takes to end this crisis," he said in a news conference Sunday. "We have to give people a sense of security and we have to show that this horrible trend we've seen over the last weeks will be stopped dead in its tracks."