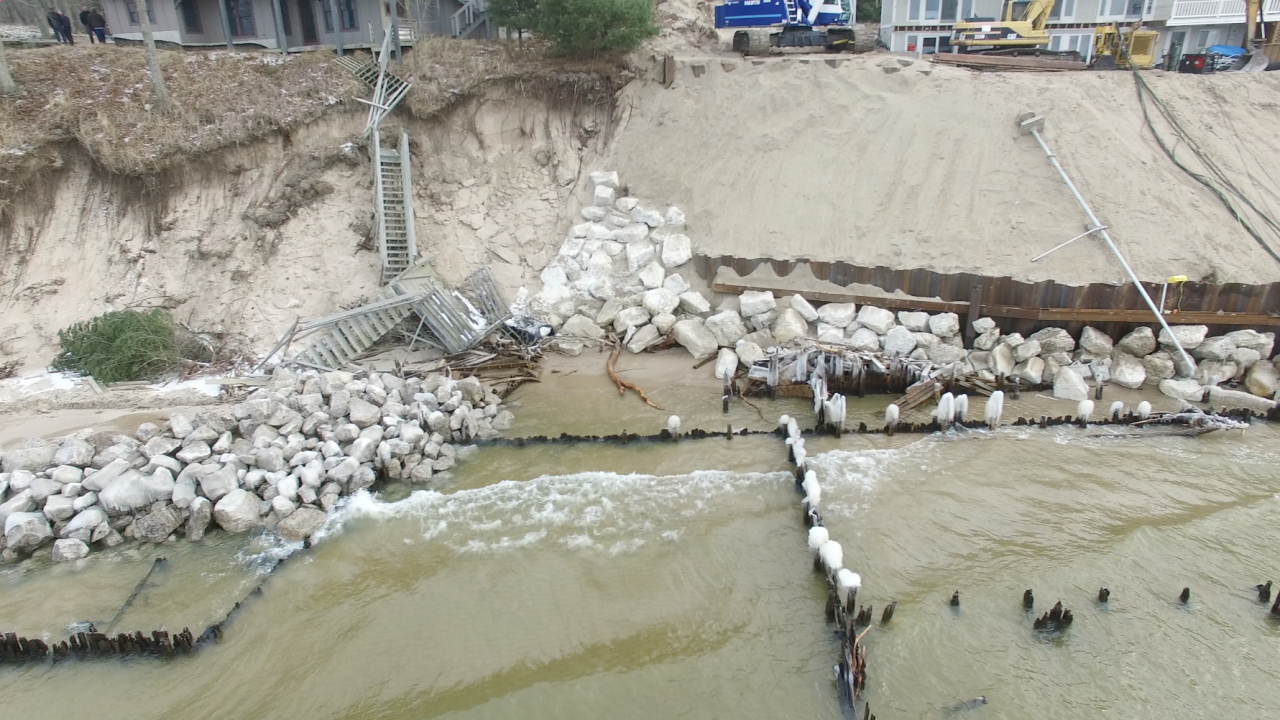 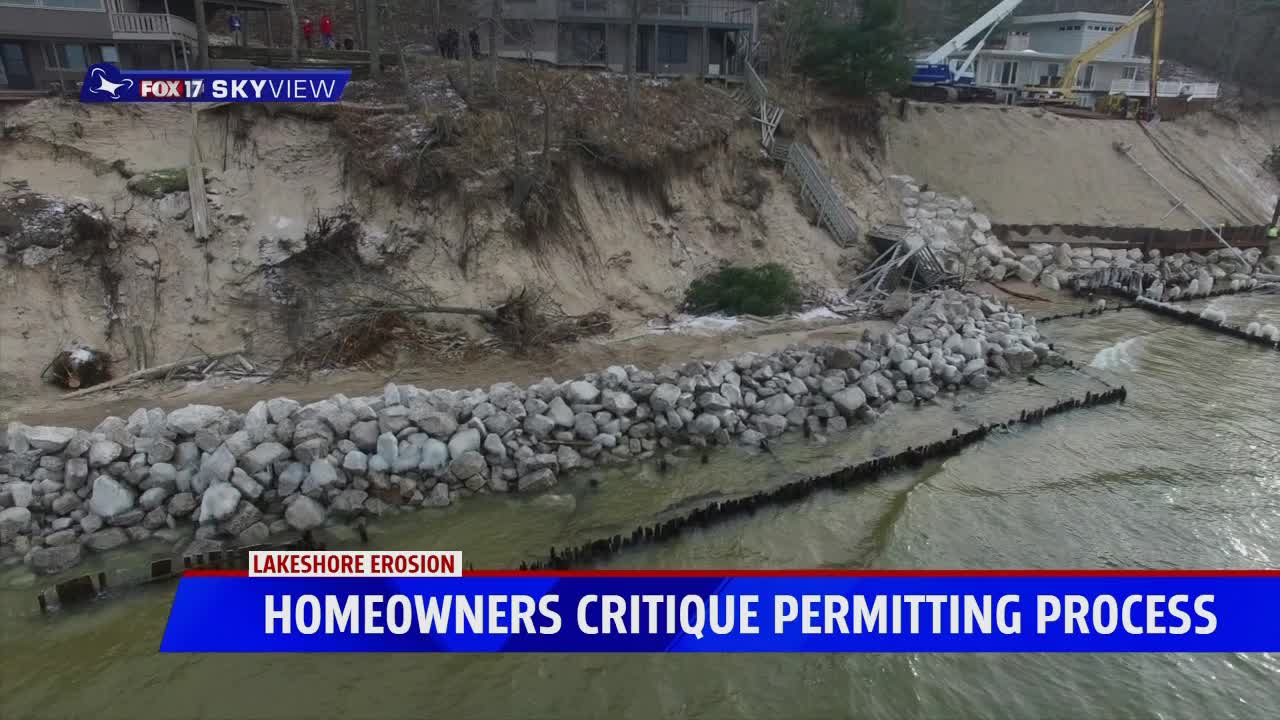 SPRING LAKE, Mich. — An elderly couple who owns a $1 million home along Lake Michigan have had to move into an apartment because they kept having nightmares about their house falling into the lake.

Their nightmare is inches from becoming a reality.

“It’s a lot to handle seeing your whole investment be washed away," realtor Sandi Gentry said.

Gentry has been trying to sell the couple's home since spring. She said it's valued at $1 million, but as erosion has inched closer to the home, buyers have made offers at half-price.

"Unfortunately when you look at this, it doesn’t make it too appetizing to purchase," Gentry said.

For the past year, Gentry has been assisting the couple in getting a permit from the Michigan Department of Environment, Great Lakes and Energy to build a rock abatement to block water from washing onto the property. The abatement seems to have saved the house's foundation from crumbling.

Under the Critical Dunes Area Program, a permit is required to alter the physical characteristics of a critical dune area. According to EGLE, the fee for these permits range between $150 and $4,000.

Waiting at least a year for these permits is a shared experience among neighbors who live along the shore in Spring Lake.

Linda Stansberry said she waited about two years to get a permit that suited her needs.

“We were told the permit was no longer valid, that we had to now reapply," Stansberry said. "Took another year for individual permits. We didn’t get any reimbursement for the first permit and we had to go through the whole process again.”

On Friday morning, Stansberry, Gentry and a group of homeowners gathered on North Shore Estates Road to voice their concerns to an assistant division director of EGLE. U.S. Rep. Bill Huizenga, R-Zeeland, and State Sen. Roger Victory, R-Hudsonville, were also there to assess the damage.

“We’re devoting every resource that we have towards getting these permits out," Jerrod Sanders with EGLE said.

Sanders said the department only has six or seven people who are able to issue permits for 3,300 miles of shoreline.

“That has been the challenge for us," Sanders said. "We’ve had staff working overtime, weekends, holidays and we are kicking it out as fast as we possibly can.”

Victory, along with other lawmakers in Lansing, recently sent a letter to Gov. Gretchen Whitmer urging her to declare a state of emergency over the erosion.

According to Michigan State Police, an emergency can't be enacted until local emergency managers have exhausted their resources, which hasn't happened yet.

Victory is credited for helping EGLE expedite the permitting process in the past month and a half.

“I appreciate my colleagues with EGLE," Victory said. "We’ve had a number of different meetings with them and also streamlining the permitting process, but there’s also a difficulty, we see construction going on right down below us. Could that have been done quicker and more proficiently?”

Sanders said he will investigate why some homeowners claim their permits haven't been approved yet.

“Again, substantially, our permits are going out very quickly but I want to figure out why the ones that are getting hung up are hung up so that we can correct that," Sanders said.

Huizenga, who recently helped pass millions of dollars of shoreline erosion funding in the U.S. House, said he's working to bring awareness to the issue to his colleagues in Washington, D.C.

In a meeting with Chief of Staff Mick Mulvaney, Huizenga showed pictures of the erosion in West Michigan.

"First of all, most people don’t understand what we have here, right, with the Great Lakes and he has offered to be helpful and will try to help where he can as well," Huizenga said. “Whether it’s the state or the federal level, we need both the legislative branch and the executive branch working together trying to figure it out.”

“Can we get FEMA a program that looks at it much like the USDA does with crop insurance or crop failure, right? Where it’s not one specific event, but it’s a series of events and over a length of time, that creates the situation," Huizenga said to the group of homeowners.

For some homes, it may be too late.

“If these houses do fall in the lake, there’s debris and large obstructions that could cause personal injury and death this coming summer if we don’t attack the problem the right way, to allow people to get permits to stop these houses from potentially falling in the lake this winter or in the spring," Rooks said.

Some have given up on waiting.

“We get a few more storms and we are, you know, we can potentially lose our home, so we’re not waiting," contractor and homeowner Pam Stille said. "I’m here to put that on the record right now. We are not waiting. We will do what we need to do to protect our home and we will eventually get our permits but I want to know if either one of you are going to tell me that I cannot go forward and protect my home unless I have a piece of paper from you?”

Stille said she wants EGLE to suspend all regulations. Sanders said the department doesn't have the power to do that.

“I understand that you’re expediting permits," Stille said. "I think that’s wonderful. I think it was a year too late.”