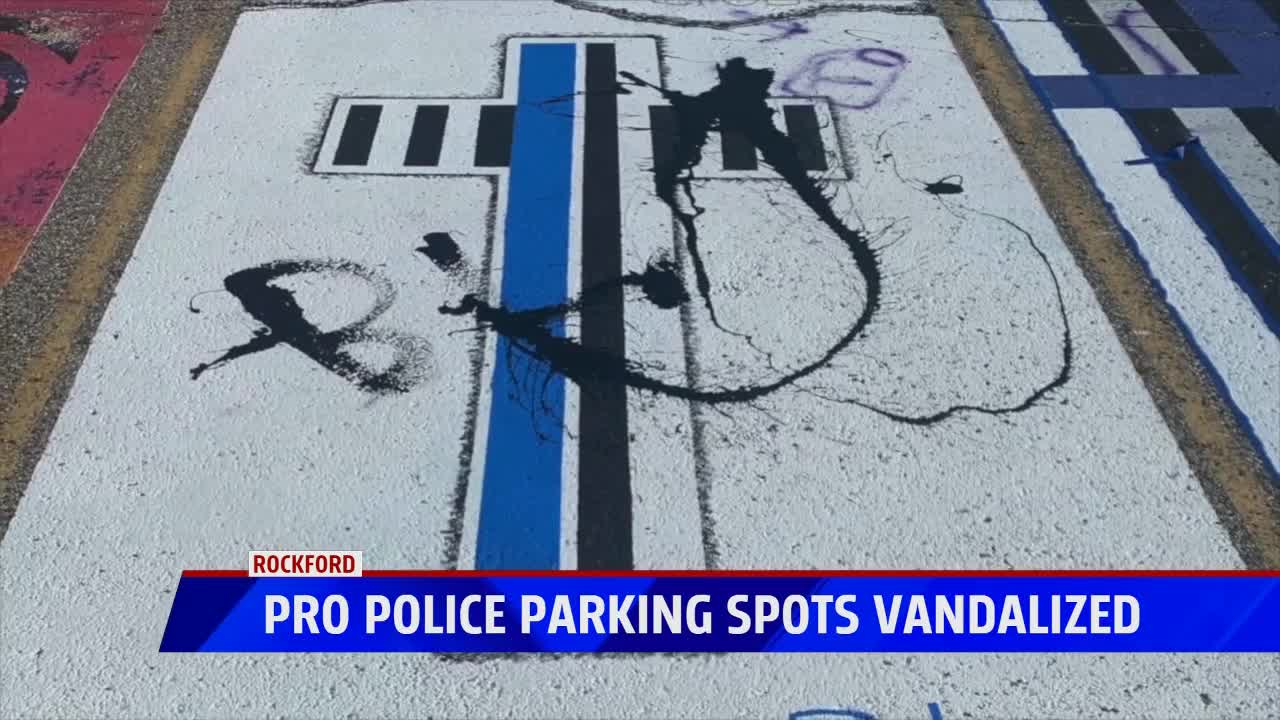 ROCKFORD, Mich. — West Michigan family is frustrated after finding their daughter’s decorated, pro-police parking spot at school, and the one next to it, covered in graffiti twice this week with messages saying “Black Lives Matter”.

Most are painted brightly and reveal something about the students who park there.

Dawn Varga says her daughter’s spot tells classmates about her father and grandfather’s careers in law enforcement and honors thousands of others.

Varga asked FOX17 not to name her daughter due to threatening messages she has received.

“It is a design that my daughter came up with,” said Varga. “It is a cross and then it has a thin blue line in it. It’s honoring, like I said the fallen or those currently serving and walking, the thin blue line.”

It took four days and $150 for Varga and her daughter to create the spot.

After finishing it though, someone vandalized the spot and the one next to it, which also has a pro-law enforcement message, twice.

Each time the spots were tagged with graffiti that said “Black Lives Matter.”

“She, like myself, did not understand why,” said Varga. “Why someone would not once, but twice graffiti something that is meant to honor officers who have laid down their lives for everyone? It turned into something else, that somehow turned into us versus them.”

There is no footage of it due to nearby construction cutting the wires running to security cameras in the parking lot according to Schibler.

However, he says the school knows of some students who may know what happened and plans to speak to them Monday.

If the district finds out who is responsible, Schibler says the student(s) would face severe consequences, like expulsion, for violating bullying rules within the district. He also said he would hand over evidence to police for possible criminal charges.

“I know what our student body is like and our families are like and they do not and will not tolerate this kind of behavior,” said Schibler. “It’s inappropriate, it’s deplorable, and consequences will be dealt with.”

Varga would like other people to be more tolerant.

“What I would like is for the vandalism to stop, the hate to stop,” said Varga. “Parents talk to your children. Why? Why are they doing this? It is okay to have a voice and believe in a cause, but it is not okay to silence others.”

The district hopes to fix its security cameras early next week.

In the meantime, they’ve installed portable cameras, turned on parking lot lights, and parked busses near the lot entrance to try and prevent further vandalism.

The family of the student for the other parking spot declined an interview request from FOX17.