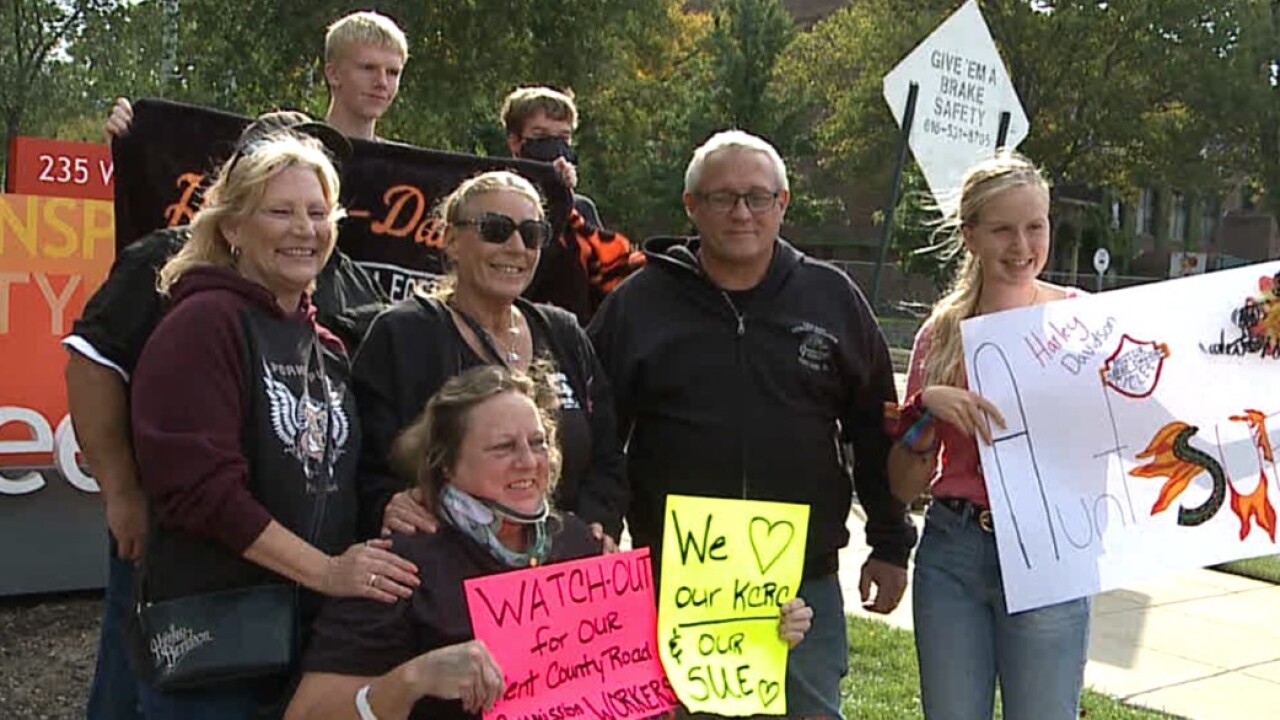 GRAND RAPIDS, Mich. — Kent County Road Commission worker Sue Meindertsma has been in the hospital since last week after being hit by a distracted driver while mowing the patches of grass along the highway in Plainfield.

While Meindertsma has not gotten many visitors due to COVID-19, she was treated to a makeshift motorcycle parade outside of Mary Free Bed this morning, with more than 40 of her closest friends driving by to see her and spread awareness for distracted driving.

A motorcyclist herself, Meindertsma is not only thankful to be alive today, but it also thankful to have the support of her fellow bikers.

"You wake up after something like that and you hear the injuries, you're pretty thankful to be alive, and I am," Meindertsma said on the accident. "(The bike parade) was amazing. When I heard about this a couple of days ago, I was absolutely overwhelmed, and I still get emotional thinking about it."

Late September has usually been a time for Meindertsma and her fellow riders to go on a lengthy ride for charity. Even though she won't be able to physically ride a motorcycle for a while, Mike DeVos, a longtime friend and next door neighbor of Meindertsma, organized the bikers to visit Sue to bring her joy during a rather dreary time.

"We've had this ride for the last five or six years, and Sue's went on it every year," DeVos said. "We obviously ride for a charity, that's pretty important to us. And so Sue couldn't be on the ride this year, we brought the ride to her."

Meindertsma believes she was hit by a distracted driver, and wanted to use today to raise awareness on the issue to protect other workers like herself.

"If we're in the road, if we're patching a pothole or whatever, please slow down," Meindertsma said. "You're already late for work, it's not a big deal, you're just going to be a little bit later. I've had several of my friends injured over the years and one killed over road construction injuries...I'm just thanking God I'm here."