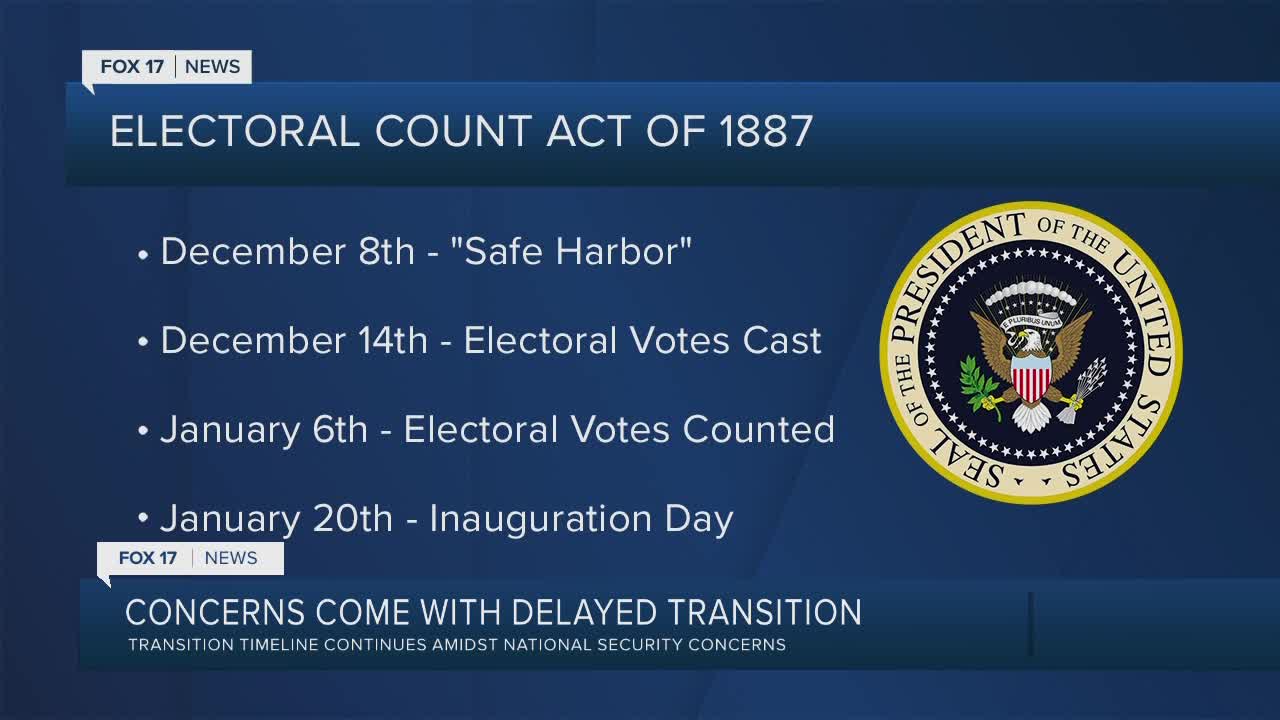 GRAND RAPIDS, Mich. — Even if President Trump does not concede the race for the White House, President-Elect Joe Biden can still be sworn in come January.

There’s nothing in the U.S. Constitution that says a president who loses has to concede the race in order for the next president to take over.

It’s been tradition for years, but even if it’s not followed this time, Mr. Biden and his wife Jill will be headed to D.C. in just a couple months.

He’s talking about the 20th Amendment to the U.S. Constitution.

“There is not a role for the president in the transition and that’s by design,” said McDaniel.

Several top officials have already stepped down after President Trump fired Defense Secretary Mark Esper. With a smooth transition being delayed by Trump, that could affect national security and the Biden administration.

“That is a concern. The United States is at sort of at a weak point and vulnerable when we are in that transition period, especially if everybody is looking for guidance and not getting any from the White House. And then, when you add to that this diminution in authority and leadership, at least at the Pentagon, that makes our adversaries a little bit more bold.”

Which is what we saw happen on September 11th.

In the 585-page 9/11 Commission Report, it was determined that the dispute over the 2000 election and the 36-day delay, cut the normal transition time in half. And the loss of time, “hampered the new administration in identifying, recruiting, clearing and obtaining senate confirmation of key appointees.”

“Participative democracy, the act of voting, is the most important thing that we have. It worked folks,” said McDaniel. “It showed what the majority of the people believed even factoring in the fact that we go through an electoral college.

There’s also a timeline set by the Electoral Count Act of 1887 which is still in play today.

December 8th is known as the “Safe Harbor” date. States have to have their votes counted by then, settle any disputes, and determine who won their electoral votes.

They’re then “presumptively constitutional”, says McDaniel, and cannot be challenged after that.

Those votes are then cast on December 14th and have nine days to arrive in Washington, D.C. on December 23rd.

The electoral votes are then officially counted on January 6th with Inauguration Day two weeks later.

President Trump may choose not to go to the ceremony. McDaniel says there’s only been three one-term presidents in history who made that decision after losing re-election.

“It was John Adams, John Quincy Adams, and Andrew Johnson,” said McDaniel. “But certainly it was on political grounds more than personal reasons and… that sitting president who had been defeated, it did not help their place in history at all.”

In terms of electors, most of them vote according to their state’s popular vote for president.

Here in Michigan, as in several states, it’s the law.

According to the National Conference of State Legislatures, it a candidate fails to vote as required, they’re considered to have resigned and a replacement is appointed.