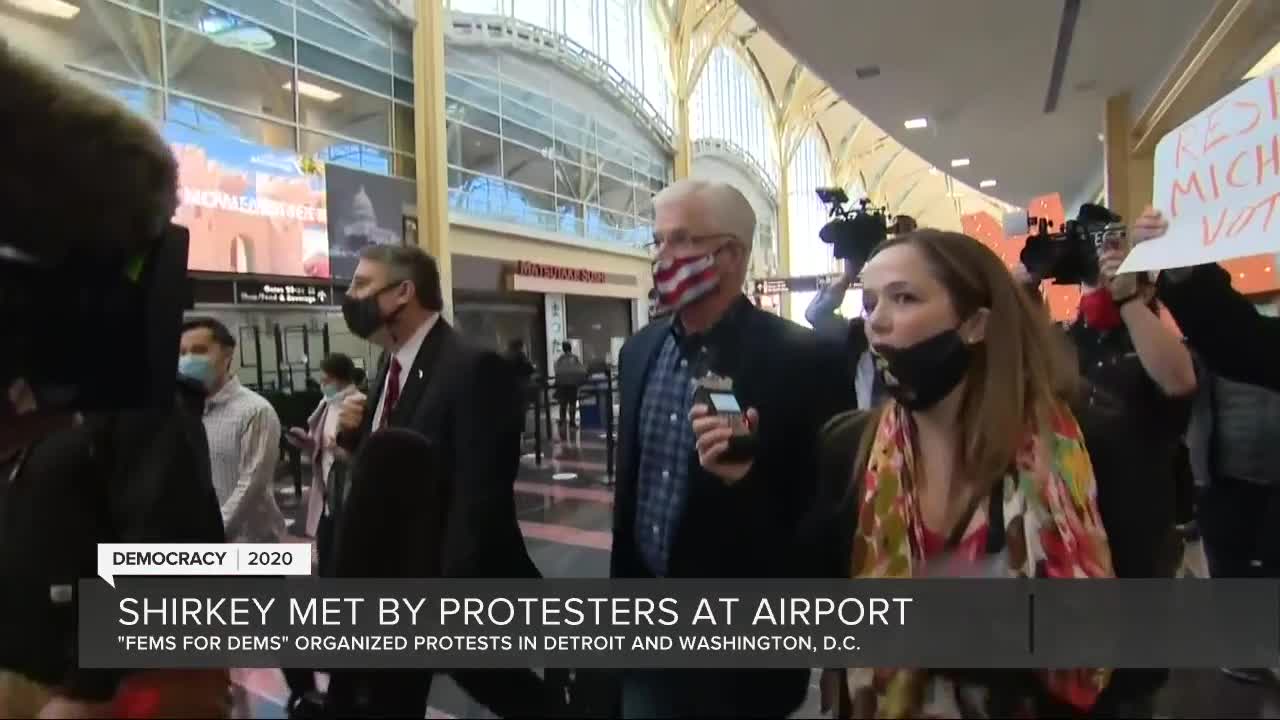 We're speaking with the Fems for Dems protesters who met Mike Shirkey as he left or Washington today.

They got up early this morning and had people at every doorway into first the North Terminal then the McNamara Terminal at Metro Airport.

They were there to make a strong statement to Michigan Senate Majority Leader Mike Shirkey and Michigan House Speaker Lee Chatfield, both Republicans and both going to meet with President Trump at the White House.

The meeting was highly criticized as a last desperate bid to reverse Michigan’s election results that have Joe Biden beating President Trump by more than 150,000 votes.

Fems for Dems had people in Detroit and Washington D. C. The group formed in February of 2016, but they had never mobilized as they did today.

Julie Campbell-Bode is the Board Chair and says, “the last voices that they heard before getting onto that place to fly down to the White House was the voices of the people. We wanted to make sure they understood that we should be their top priority. At the end of the day they report to us. We’re the people who put them where they are we pay their salaries.”

Going into the meeting there was concern that Republicans who control the Michigan Legislature could take action to prevent final certification of the statewide Michigan vote or somehow declare the vote results are defective and vote to replace the Michigan Electoral College 16 Electors with their own and vote for Trump.

The founder of Fems for Dems is Lori Goldman. She says they started to support Hillary Clinton as the first viable female candidate for President in 2016.

Michigan had a record turnout in the 2020 Presidential election and Fems for Dems has also grown.

Goldman says, “we have built our community at this point to over 10,000 members and we are uniquely qualified to go out and have our voices heard in so many different ways.”

Fems for Dems plans to be in Lansing on Monday for the certification of the statewide vote.

After the meeting at the White House, Republican leaders released a statement that said in part:

We used our time in the White House to deliver a letter to President Trump making clear our support for additional federal funds to help Michigan in the fight against COVID-19. We have since sent the same correspondence to congressional leaders.

The Senate and House Oversight Committees are actively engaged in a thorough review of Michigan’s elections process and we have faith in the committee process to provide greater transparency and accountability to our citizens. We have not yet been made aware of any information that would change the outcome of the election in Michigan and as legislative leaders, we will follow the law and follow the normal process regarding Michigan’s electors, just as we have said throughout this election.

Michigan’s certification process should be a deliberate process free from threats and intimidation. Allegations of fraudulent behavior should be taken seriously, thoroughly investigated, and if proven, prosecuted to the full extent of the law. And the candidates who win the most votes win elections and Michigan's electoral votes. These are simple truths that should provide confidence in our elections.