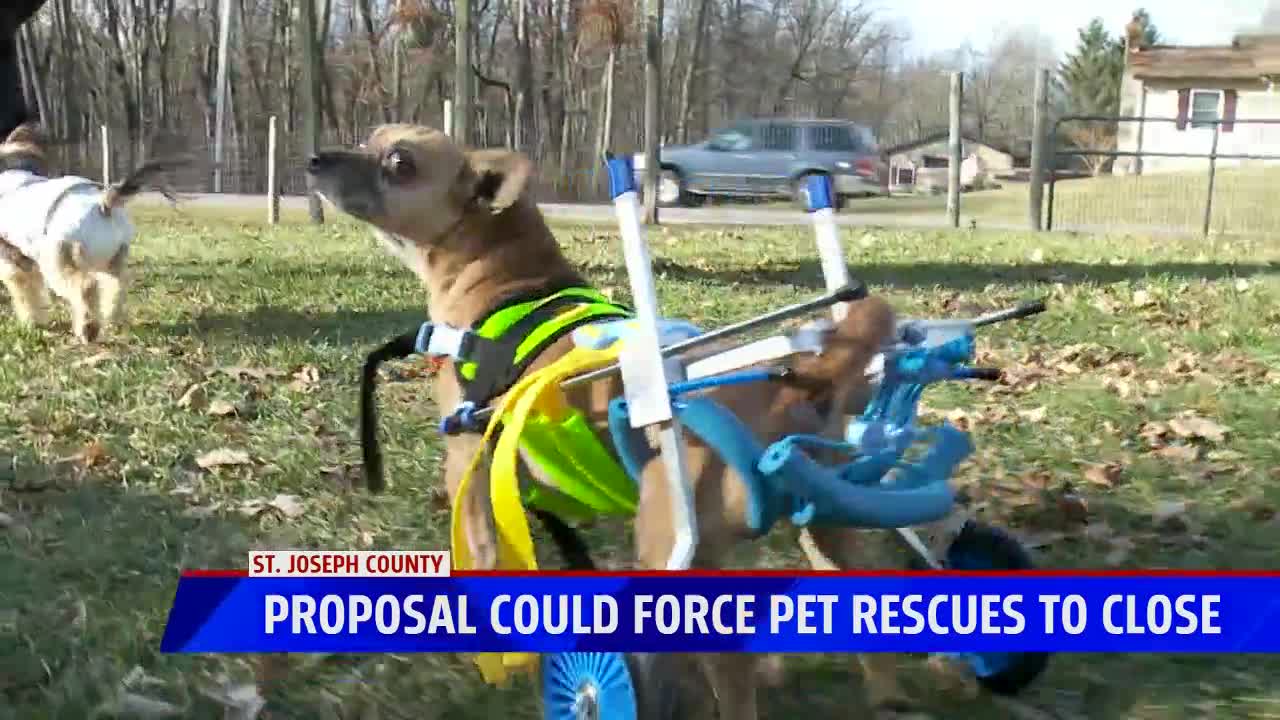 Dog rescues and sanctuaries could be in jeopardy in St. Joe County if officials adopt new ordinance

SHERMAN TOWNSHIP, Mich. — Kelli Coykendall’s home is filled with dogs. There’s a few small dogs on the couch, looking out the living room window. There’s a few curled up on their beds on the floor. And, there’s other ones walking around looking to be pet.

Kelli said she was passionate about each of them.

“They are my absolute everything,” she said during an interview while holding two dogs in her lap. “I spend my every waking moment taking care of these guys and to think that the only way I can keep them in this entire county would be to put them in a separate building away from me. I’m not willing to do that.”

Kelli said she’s been running her sanctuary for five years. However, recently, she learned of a proposed new ordinance that changes the definition of the word kennel.

“They’ve essentially opened up this new ordinance to mean anybody who’s keeping three animals for any reason including someone like myself who has a senior dog home, is going to need a kennel license,” Kelli said. “And, they’re saying to even apply for one you have to live on five acres or more and the kennel itself can’t be apart of your dwelling.”

She said typically kennel is defined ‘as anybody who’s running an operation that constitutes breeding, boarding or sales.’ However the new additions of ‘3 animals or more’ and ‘for any other purpose’ was problematic.

“I’ve got three dogs in wheelchairs. I’ve got four with no eyes. A lot of them are in diapers, on medication three times a day. I’ve got [one with] cancer, heart disease,” Kelli said. “These are not dogs I’m willing to put in a separate building out back.”

Kelli said she was told that zoning officials were creating the new ordinance to combat noise problems. However, there’s no noise ordinance in the county. Establishing one is something she’s going to bring up at a Sherman Township town hall on January 14.

“If the problem is barking dogs, and you’re saying there’s no noise ordinance in the county, then that should apply to noise period,” Kelli said. “If it’s not a care or welfare issue of the animals themselves then it shouldn’t just be about how many you own. It should be about the care and control of what they’re doing.”

All of Kelli’s dogs are licensed with the county and up-to-date with their vaccines, she said. They were also completely quiet during the entire 20-minute interview with FOX 17.

Kelli said she was also told that the reason the new ordinance was created was to combat puppy mills. She was informed that people were moving up from Indiana and creating them in St. Jospeh County.

It’s a reason Kelli agrees with, she said. However, she believes it shouldn’t affect everyone who properly takes care of three animals or more.

“Those of us who have spayed or neutered animals, it shouldn’t matter how many you have,” Kelli said. “If you live out in the country and you can care for them and show your licenses and your vaccines and and you’re not leaving them out 24/7 to upset the world, people like me shouldn’t be nervous and I am.”

***FOX 17 reached out to Doug Kuhlman the zoning administrator, requesting an interview. We’ve yet to hear back. However he said over the phone that he may hold-off on the ordinance for now. Stay with FOX17 for more updates.***