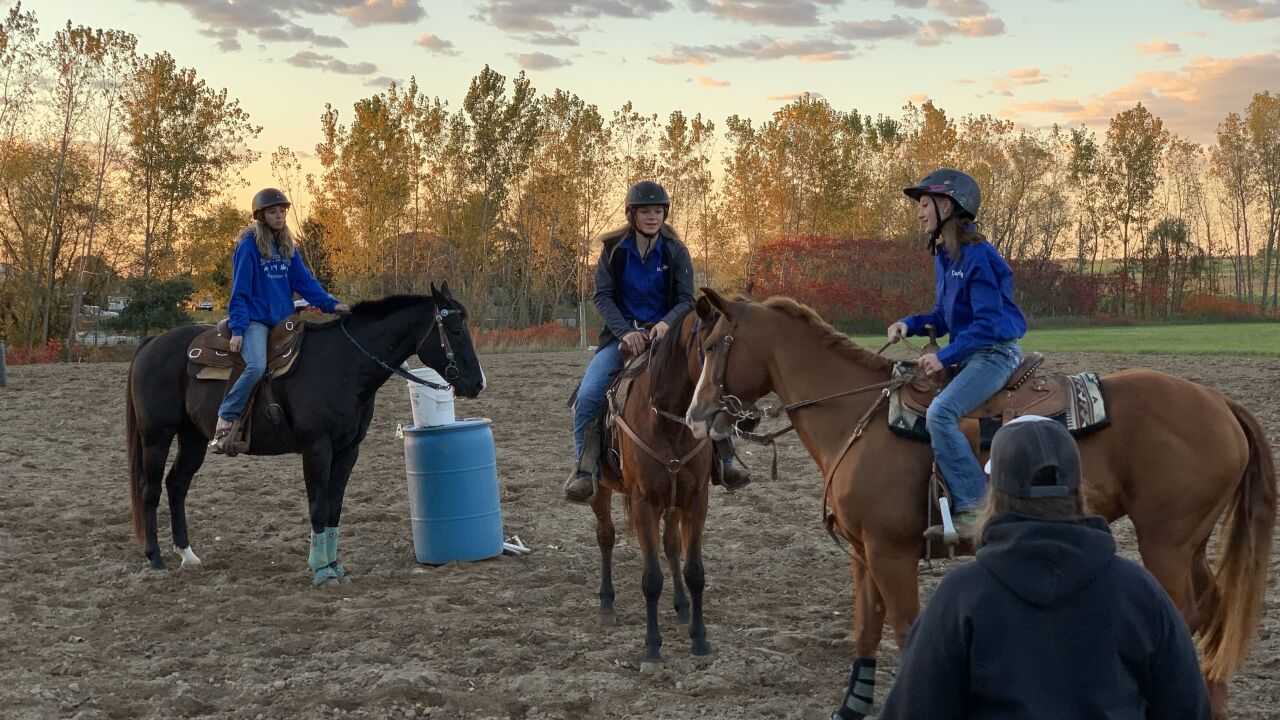 HOPKINS, Mich. — For the third consecutive year, the Hopkins equestrian team will compete for a state championship.

The Vikings are one of ten teams in Division B who will make the trip to Midland to compete for more hardware, beginning on Thursday morning.

"It takes a lot of mental ability and a lot of communication between you and your horse," said equestrian coach, Sue Snoeyink, "you have to be a real team."

Snoeyink started the Hopkins equestrian team back in 2013 and the program has seen success ever since.

This fall is no exception after the team won yet another regional championship last week.

"We didn't expect to go to state," Snoeyink smiled, "because we have such a yonug team. I think that's a good way to go in [to state], we know we worked our hardest and we can let the chips fall where they may."

The roster consists of eight riders with one lone senior, Katelyn Williams, who is ready to experience yet another state meet.

"It's something that you'll never forget," Williams said, "you go there and you don't know a lot of the other teams there. You make new friends and you get to experience what it's like to show in a big place and get that big state type of environment."

However, others are experiencing the big stage for the first time. In fact, sophomore Megan Williams had only ridden a horse once prior to this year and has come a long way since joining the team.

"I expected just to be running in a pasture, doing simple things," Williams laughed, "it's a lot more than that. It's patterns, it's commitment, bonding with your horse, and getting that partnership with your teammates and horse."

And equestrian is much more than that, with several different events testing the skills and depth of the teams.

"We have jumping type of events, we have reigning events, we have saddle seat which is a lot of high stepping horses and things like that, we have speed events, and then there's a trail course, which is almost an obstacle course for horses," Snoeyink explained.

The team finished third at states in 2018 and fifth in 2019, they're hoping to bring home the first state championship in program history this weekend.

"It's so much fun when you get to the top," added Katelyn Williams, "it brings so much excitement because you've worked so hard for it."

And Snoeyink says she hears a lot that equestrian is not a real sport, but she says anybody who thinks that can hangout with their team to see what it takes.

"It takes a lot of time, money, effort and dedication to make all of this happen," she added.

The state meet will be held at the Midland County Fairgrounds and will run Thursday morning through Sunday afternoon.